Ezekiel Mutua: ‘Media Houses Funded by LGBT NGOs Are Scheming to Malign Me’ 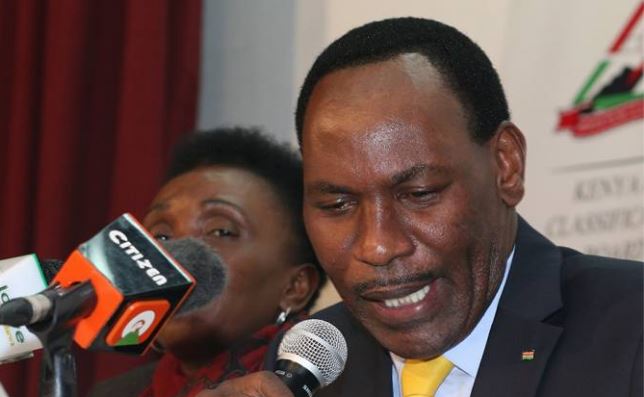 Kenya Film Classification Board(KFCB) CEO Ezekiel Mutua has accused media owners of hatching a scheme to tarnish his name because of the board’s campaign on content regulation and moral values.

In his statement, Ezekiel questions why media owners are using crude means to fight him.

“Why would Media Owners find it necessary to use crude means to fight me? I am told a scheme has been hatched to run a series of commentaries on tv, radio, newspapers and blogs to malign me and the Kenya Film Classification Board because of our campaign on content regulation and moral values,” reads Mutua’s post in part.

Mutua notes that as part of the evil scheme, mainstream media houses have in the past few months been deliberately publishing skewed articles and lies about him and the board.

“In the last one month alone, the Nation newspaper has had over ten negative, unbalanced and inaccurate articles about the Board and about my person. Standard newspaper Cartoonist – Gado has drawn a series of bizarre caricatures about me while the Star’s confessed champion of homosexuality Patrick Gathara has run over ten cartoons and articles ridiculing me and disparaging the work of the Board,” says Mutua.

He adds, “Some evil men and women holding key positions in the media houses have even discussed how I should be removed from KFCB or even physically eliminated because I am a threat to media business.”

The KFCB Boss alleges that the scheme to remove him from office has been heavily funded by foreign NGOs supporting the LGBT community in Kenya.

“Some of these LGBT NGOs have very big support in the media because some people holding key positions in the media and entertainment industry are homosexuals and would want to stop our campaign against inappropriate content.”

Mutua also claims that the initial plan was to project him as a political aspirant engaging in self-promotion using a public office.

“Initially the plan was to project me as one aspiring for a political seat and engaging on self-promotion using a public office so as to seek an elective post next year. Larry Madowo, Macharia Gaitho, Gado and other senior columnists have repeatedly published stuff to this effect,” says Mutua.

According to Mutua, media personalities are planning to use bloggers to malign him.

“Big monies are changing hands and bloggers will be well paid to unleash all manner of filth against me. The idea is to silence me so that these media houses can continue to air inappropriate content against the law. They believe by maligning me and discrediting the work of the Board, Kenyans will stop supporting us and that other Government officials and agencies will fear to regulate the media,” reads Mutua’s statement.

Loading...
VIDEO: Here’s That Matiang’i Diss Song Full of Vulgar Lyrics < Previous
Sonko Beaming with Pride After Adopted Son Scored Top Marks in KCPE Next >
Recommended stories you may like: