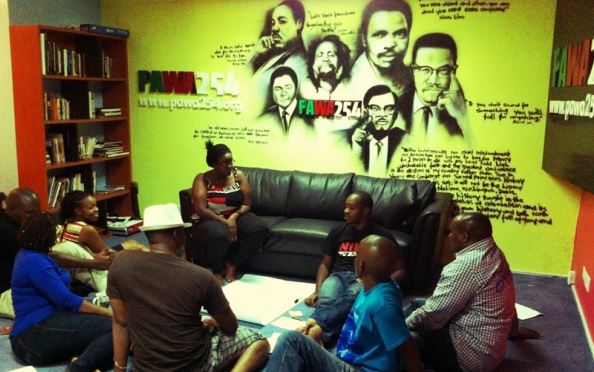 They say great leaders know when to step down and handover the baton to the next leader and that might be the case with renowned photojournalist and activist Boniface Mwangi.

The Starehe MP hopeful looks set to take on the next chapter of his life following his exit as team leader of Nairobi’s creativity hub, PAWA254.

Boniface Mwangi founded the hub in the late 2011 and opened its doors in January 2012. In 5 years, the center has empowered young people, advanced the art industry in the country, and inspired a new generation of artists and activists.

In a post on Facebook, prior to his last public event as PAWA’s team leader on Sunday, the ‘Unbounded’ author announced that January will be his last month as team leader.

“I was born poor. I spent my youth running away from poverty. All I wanted was to make it and by 27, I made it or so I thought. l married a beautiful wife, owned three cars, a successful photography business, a modeling agency and substantial shareholding in a media company. Like many people from disadvantaged backgrounds, I felt the need to prove myself by owning as much as I could. ‘Things’ instead of ‘substance’ defined me.

I had an awakening when I realized that the real fight was not against the lack of material things, but the system that propagated poverty. In taking my stance, I sold the cars and started PAWA 254. In the last five years PAWA has empowered more young people than l thought possible. PAWA has done a lot to advance the art industry in this country. We introduced hubs in the slums and inspired a new generation of artists and activists. We helped discover new talent, redefined perceptions in the arts, introduced street art and exhibitions, awarded and supported some of the best photographers and filmmakers in Kenya. Most of the artists we incubated are now running successful ventures where other artists are being incubated.

At PAWA we espouse strong ethical values including integrity, Passion, independence and excellence. We have helped facilitate a bold, innovative and thriving art landscape that has created social change in Kenya. We have developed the capacity of emerging artists and facilitated the integration of artistic expression for livelihood development. PAWA uses art for civic engagement through writing, dance, poetry, graffiti, theatre, music, film and photography. We spark civic participation by drawing attention on emerging social concerns in the country. We advocate for good governance and a corrupt free Kenya.

One of my most memorable moments was after the Garissa Massacre, when PAWA 254 organized a vigil to mourn the victims. All the artists performed for free, all suppliers provided their equipment at no cost and the media aired the event live. The nation came together through art. PAWA254 is the embodiment of my work. It speaks to the fight of my life, that all Kenyans can live in an equal society that rewards hard work and honesty.

I am currently serving my notice at PAWA254, January will be my last month as team leader. l am confident that the succeeding leadership team will continue with the good work, and take PAWA254 to new heights. My last public event as PAWA’s team leader will be at the culmination of this year’s work at the PAWA Festival #PAWAFestival.”

Loading...
Noti Flow: ‘Femiplan Listens to My Diss Track Everyday and Kyki Mwitu is a Lazy Drama Queen’ < Previous
Cute PHOTOS of Kenya’s Newest Celebrity Couple Timmy TDat and Dela Next >
Recommended stories you may like: