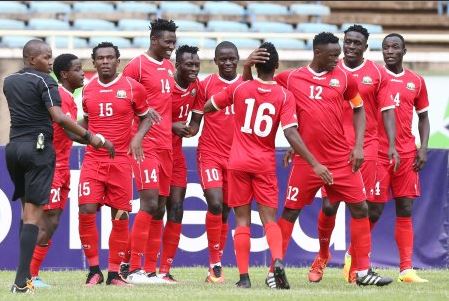 Paul Were’s second half strike was the difference as Harambee Stars went eight successive matches without a loss.

Were who plies his trade for second-division side Archanaikos of Greece found the back of the net in the 53rd minute amid protests from Liberian players who claimed Were had scored from an offside position.

Centre referee Andrew Juma let the goal stand as Stars built on from their replica Saturday win over Mozambique at the same venue.

The win spurred buoyant reactions from Kenyans on social media who are not used to seeing the national team win let alone go on an 8 match unbeaten run.

We have sampled the reactions:

I hope the Harambee Stars Win is Not a scandal

“Harambee Stars”.Stanley Okumbi and the technical bench must have a 100% salary increment.Good job team Stars.

When it’s been so long that you don’t even know how to celebrate Harambee Stars’ win.. pic.twitter.com/FZ9MoN0zXn

Harambee stars won and now Eric Omondi cheats, and you want to tell me its not a plot by the govt to distract us from the KES 5B Scandal?

As Harambee Stars we’re requesting a friendly against Germany, we need to stop imagining Paul were scoring 5 goals past Manuel Neuer

Paul Were and Harambee Stars are proving that good leadership is mandatory for progress,the FKF President and the Coach plus the boys kudos!

I’m confident that if Harambee stars continue this way,we will qualify for the AFCON n probably WorldCup s/o Paul Were

Paul Were scored a superb goal for Harambee Stars, what a team! #HarambeeStars

Harambee Stars can only win friendlies but not serious competitions through jokers like Paul Were.

Why are guys surprised that Paul Were is this good? Clearly you never watched him in the KPL before he left for Greece! #HotbedOfTalent ?

Loading...
Mumias ACK Bishop: My First Time In Nairobi I Feared KICC Would Fall on Me < Previous
Eric Omondi Speaks Up on Restaurant Fight with Fiancée Next >
Recommended stories you may like: