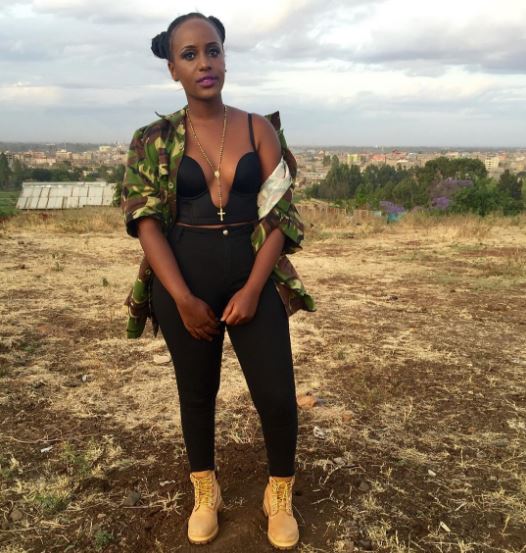 The female rapper has been relatively quiet but her latest project dubbed ‘Pilau Njeri’ is making all the noise.

Pilau Njeri, meaning ‘fake pilau’ is a hardhiting response to Njeri who fired the first round of shots last year when the ‘WhoisKing’ debate lit up Kenya’s hip hop scene.

Njeri was one of the notable femcess who contributed to the debate with a diss track of her own titled, ‘No King.’

In her song, the femcee took not so subliminal shots at FemiOne and even King Kaka.

In the track, Njeri mocks FemiOne’s single ‘Brikicho’ alluding that Femi One was getting a raw deal from her ‘broke’ label -Kaka Empire- run by King Kaka whose ‘Ligii Soo’ remix burst Femi One into the mainstream scene. Njeri also accused FemiOne of having a ghost writer.

In her response, a clearly irked FemiOne goes off not only on Njeri but fellow female rappers Sosuun, Kush Tracey and Noti Flow.

The single has elicited mixed reactions with most listeners trashing FemiOne’s efforts as unnecessary. Some have even claimed that this diss has King Kaka written all over it.

Loading...
The Hottest Stories on the Internet Today (Tuesday November 1) < Previous
Watch Music Legends Nonini and Didge Team Up in ‘Tudunde’ (VIDEO) Next >
Recommended stories you may like: