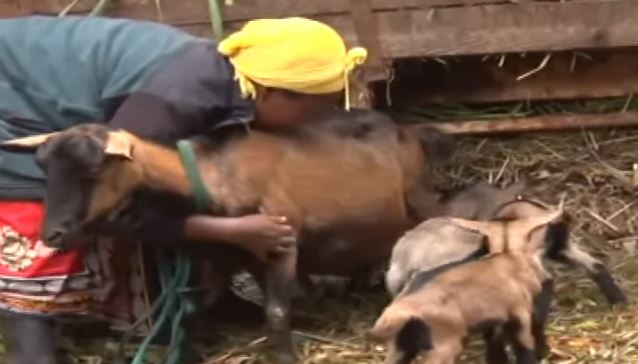 A goat in Mathira, Nyeri County is the village marvel after it gave birth to 5 kids.

Mumbi Duncan, 46, owner of the goat and a mother of three has christened the she-goat ‘Jane’, a name she says she loves.

According to Mumbi, news of the goat’s ability to give birth to 5 kids at a time have spread far and wide, with scores of farmers visiting her home to convince her to sell them the goat.

Mumbi acquired ‘Jane’ back in 2010 and since then it has given birth to a total of 25 kids.

Jane, being the gift that keeps on giving bore four kids in the fourth and fifth time, before giving birth to five kids in the subsequent two pregnancies.

Mumbi describes the very rare occurrence as a great blessing from God.

Watch the video by Citizen TV below: