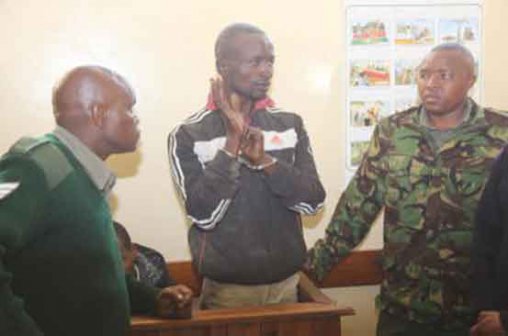 A man who stabbed a Nakuru Resident Magistrate on Tuesday has admitted having attempted to kill the magistrate and the complainant.

Michael Kihoro Njeri stabbed resident magistrate Eunice Kelly on the hand and complainant Edith Adhiambo on the neck with a screwdriver after he was handed a three-year jail term for assault.

He was arraigned in court on Wednesday under tight security where he pleaded guilty to the attempted murder charges before Chief magistrate Josephat Kalo.

He also admitted to injuring a police officer Wanjiru Ngugi on her index figure during the incident.

He was charged with six counts, three of which he denied.

He denied obstructing a police officer from performing her duty, intentionally obstructing the magistrate from executing her court duties and causing a disturbance at the Nakuru law courts.

The suspect told the court that he found the screw driver in a government building.

“I found the screwdriver in a government building and I being an electrician saw it useful to me and picked it up,” said the man.

He said he had no intention of attacking the magistrate and the complainant because he thought he would be set free.

“I didn’t know what I was doing, I got furious since in my mind I thought the court will let me free, I feel sorry” he added as quoted by Standard.

He was denied him bond and taken to Nakuru GK prison. The case will continue on Friday.