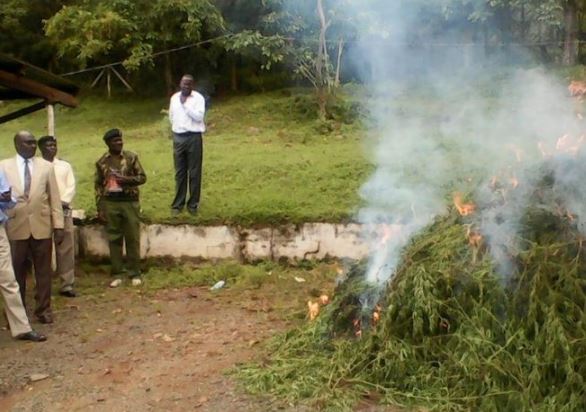 Police in Migori County on Monday uprooted and set ablaze over three tonnes of bhang with a street value of Sh1.2 Million.

Confirming the incident, Migori County commissioner Mr Seif Matata said the bhang was found on a half-acre farm in Boda area along the border of Kenya and Tanzania in Suna West Sub County.

Mr Matata said they got a tip-off from members of public but did not make any arrests as the suspects and plot owner escaped before police arrived.

The county commissioner noted that drug traffickers in Migori have embarked on cultivating their own bhang after police blocked all routes through which they have been ferrying bhang from the neighbouring Tanzania where the cultivation of bhang is legalised.

“This is just the beginning, we will find more farms where bhang is planted and destroy it,” he said.

Loading...
PHOTOS – Corazon Kwamboka Among 125 Lawyers Admitted to the Bar < Previous
Nyeri Goat Shocks Villagers After Giving Birth to 5 Kids for a Second Time (VIDEO) Next >
Recommended stories you may like: