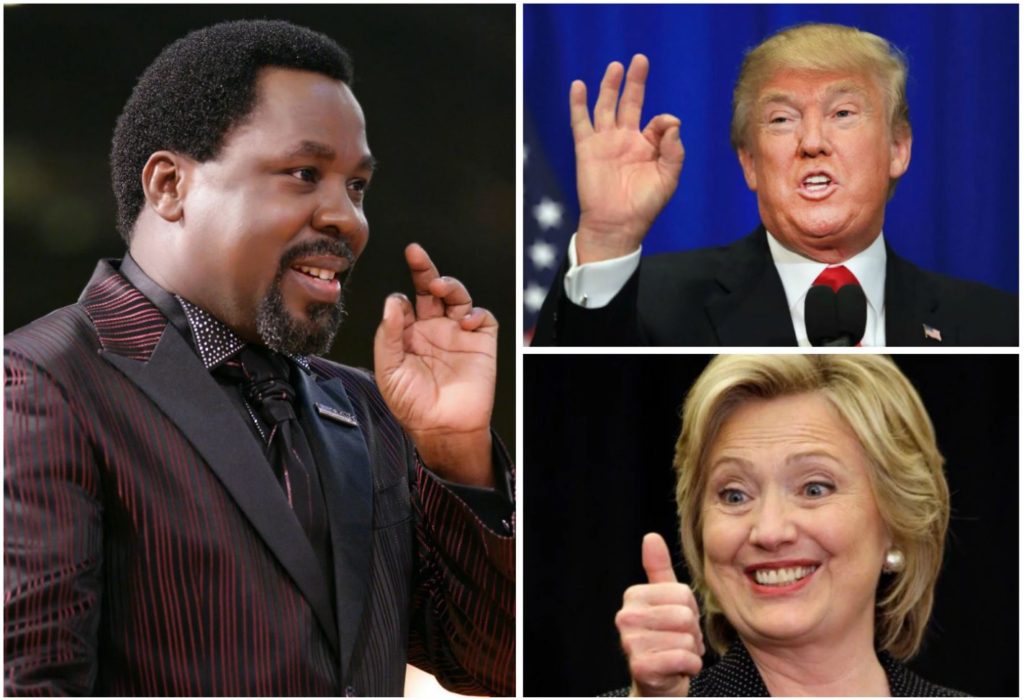 Self proclaimed Nigerian prophet TB Joshua has come under scathing attack after his ‘prophecy’ on the US election fell flat.

On Sunday, Joshua revealed that God had showed him who the next US president will be. “Ten days ago, I saw the new President of America with a narrow win,” he said. “(There will be) attempts to possibly pass a vote of no confidence… In order not to keep you in suspense, what I frankly saw is a woman.”

Read: God is With Her: TB Joshua Prophecies The Next US President

Here’s a clip from that summon.

That message was subsequently followed by a post on his verified Facebook page with over 2.5 million fans. The post has now been deleted but not before screenshots were taken. 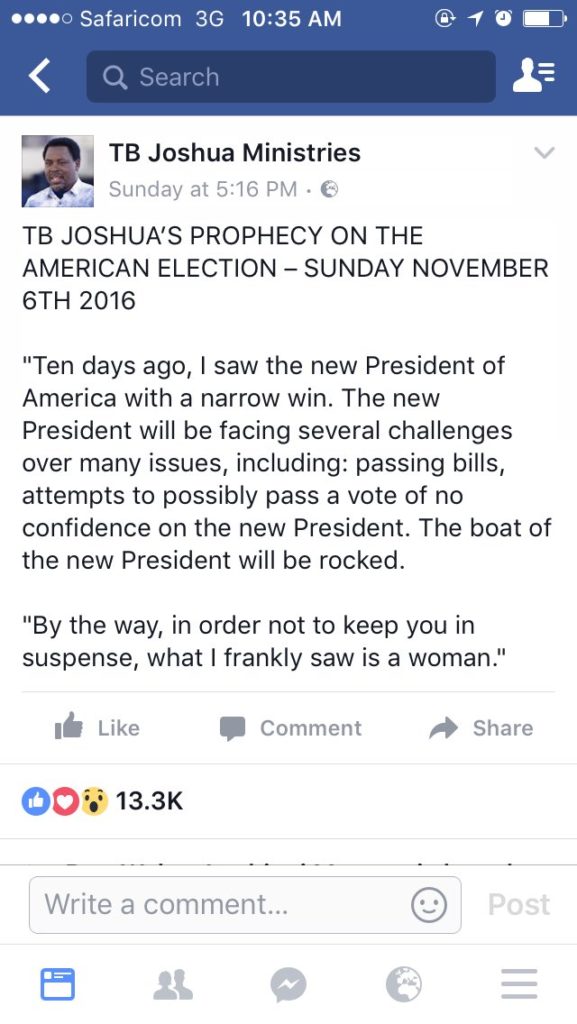 TB Joshua has always been a controversial figure with numbers divided on whether he is a true prophet or just a pretender. But after the latest debacle, there is consensus that he is just another ‘false prophet’ who uses ambiguous statements then claims prior knowledge whenever an event occurs. This one time he went against the script and the results are disastrous.

It is quite clear he looked at the opinion polls like everyone else to make an educated guess.

Fans have not stopped roasting him since Trump was announced the winner. Here are some tweets.

People: TB Joshua u said a woman will win
TB Joshua : u people didn't hear me clearly, I said woolman, the person his head looks like wool ?

TB Joshua right now After his Prophesy On US Election??? pic.twitter.com/D5pa67H2HW

Tb Joshua: The vision was not very clear. pic.twitter.com/tuWOl1UrVp

If you're a follower of or a believer in tb joshua, anytime you hear the word "idiot", you must stand up and say "present sir:

When You see TB Joshua after you've been deported from The US #Election2016 pic.twitter.com/DdzAIriO8m

When you see TB Joshua at the entrance of the synagogue church pic.twitter.com/koiYLFKTlu

TB Joshua Right Now Be Thinking of the New Revelation to Cover the previous revelation pic.twitter.com/ceHIpVkpbk

The only good side to all of this is that TB Joshua played himself.

TB Joshua be sweating profusely right now. I don't wanna be him.

Someone pls get me TB Joshua's passport number pic.twitter.com/ErZoT1JPjC

Nigerians when next they see or hear anymore TB Joshua prophecy. pic.twitter.com/WtNU3SaiX9

"Dear tb Joshua. This is DSTV.
We shall be removing Emmanuel tv from our bouquet list.
Next time keep chut…" pic.twitter.com/iDu04sOBEx

Please TB Joshua hide where ever you are because Clinton is searching for you pic.twitter.com/Fy27tpUbAP

But you said Hilary would win by a narrow margin. pic.twitter.com/6HbADa5bBP

Where is TB Joshua ? pic.twitter.com/ywLqhKabgL

There have been multiple attempts to expose TB Joshua as a conman, but his following’s growth has not slowed. In light of these events however, it will be keen to see how he holds up.

Here’s a YouTube video revealing how he fools his congregation.

It would have been ideal if Kenyan ‘prophets’ led by David Owuor would have given their prophecies on the just concluded US election. That way we would have weighed them on the same scale. But I bet moving forward they’ll be careful to avoid specifics.

So now, do you believe TB Joshua is a true prophet?

Loading...
Hilarious KOT Reactions on Twitter Trend ‘Now That Trump is President’ < Previous
The Hottest Stories on the Internet Today (Friday November 11) Next >
Recommended stories you may like: