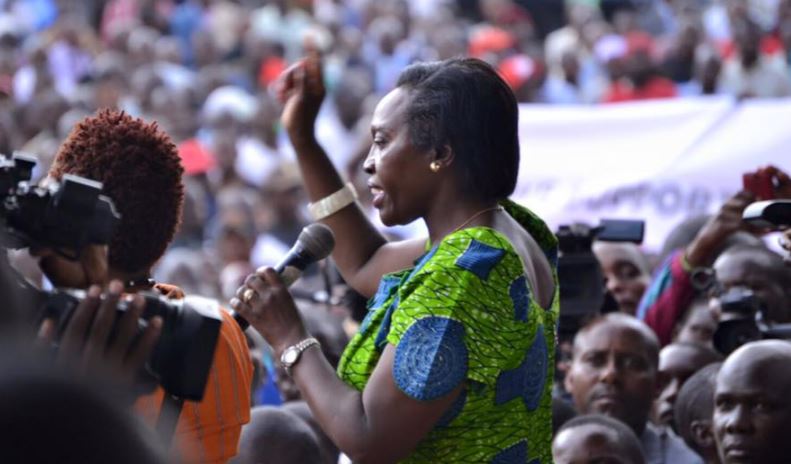 When Donald Trump went against the odds and beat Hillary Clinton, nothing should shock us anymore. That’s why Martha Karua’s endorsement of the Jubilee government was not very surprising.

The ‘iron lady’ has been in the cold for far too long and has realized her political career is headed nowhere unless she bows down to the tribal king. She followed Peter Kenneth’s lead when he also endorsed Uhuru for a second term.

Karua said that he will be supporting Uhuru but will not dissolve her party Narc Kenya to join Jubilee. Her likely competitor in the Kirinyaga seat will be former devolution cabinet secretary Anne Waiguru.

Most people, particularly opposition supporters have criticized her for not standing by her principles. But that exposes their hypocrisy. When Ababu Namwamba left ODM ‘on principle’, they accused him of having received a brown envelope. But when Ngilu starts gravitating towards Cord, she is welcomed with open hands… never mind why she was fired from government.

The truth is our political landscape has no room for principles. You are either with us or with them. Raphael Tuju, Peter Kenneth and even Martha Karua are living proof of this. PK and Karua have learned their lesson, but that does not mean others have learnt from them.

Ababu Namwamba, Alfred Mutua and Isaac Ruto are some of the politicians currently tempting the tribal waves, and the results may be unpleasant.

Back to Karua, here are some of the reactions after she made her announcement.

Just the other day Martha Karua was asking the president to resign if he can't handle corruption. This hoes ain't loyal

"Martha Karua", welcome home. and remember to come with a toothpick!

Politics is supremely guided by interest. Martha Karua is just being Kenyan

Kenya politics is all petty,without a tribe you got no life. Martha Karua is representation of Kenya and tribes

Martha karua is also backing jubilee,How do I stomach this ,it was just selfish political interest. Not a bit about integrity

Martha Karua is a political comedian. Uhuru should know that marrying a comedian doesn't guarantee him happiness in marriage.

Martha Karua has pulled a Trump on me.I thought she stood for something. Kumbe in kama wale wengine tu!

??? what a CONUNDRUM. Martha Karua spent 5 years claiming Jubilee government is corrupt only to HAVE TO endorse Uhuru in order to run. ???

Martha Karua is just being a politician,, she's done nothing unusual.. it is what it is, season of migrating for politicians

Martha Karua is smart enough to know that she stands no chance of winning that Kirinyaga seat if she is not supporting Uhuru.

So Martha Karua will support UhuRuto? What of her interest in CORD. Truly, these gals ain't loyal.

In Kenya it's always about, me, me and I, fake politicians Martha Karua being one of them

In the last 4 yrs, Martha Karua has consistently termed the Kenyatta administration as a farce and corrupt albeit a 2017 endorsement.

Martha Karua backs Uhuru Kenyatta for 2017 polls. It has never been about integrity and moral ethics but self political interest.

Martha Karua is just like Peter Kenneth who realized he cant win elections by trending on twitter, KOT never vote! now they run for governor

A good template of a kenyan politician. And some of you think that those in the opposition are better. "Martha Karua"

Martha Karua is that girl, who goes to campus, gets paged, aborts 4 times, then goes back pregnant, crying to his father's house.

Loading...
As Isaac Ruto Flies To South Africa, Magufuli’s Wife Admitted To a Public Hospital in Tanzania < Previous
PHOTOS – Inside Donald Trump’s KSh 10 Billion New York Apartment Next >
Recommended stories you may like: