VIDEO: Watch Chipukeezy’s Interesting One on One Interview with ‘Prophet’ Kanyari 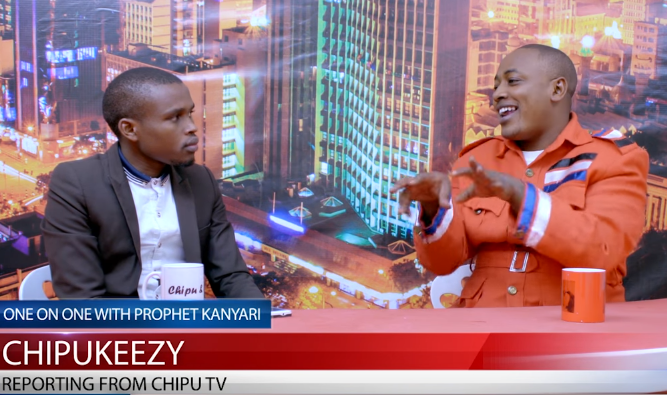 Less than 3 months since he launched the YouTube channel, the comedian has well gor everyone’s attention by hosting infamous pastor Victor Kanyari.

Almost two years after a investigative television series exposed his fake miracles and money-minting schemes. the bishop remains a person of interest, mostly due to his ever growing wealth.

In May this year Kanyari revealed he would soon be opening the gates to his multi-million estate along Kangundo road. He added he would name the estate ‘310 Estate,’ coined from the infamous ‘Sh310 seed money’ he got from congregants in his Salvation Healing Ministry church.

In episode 4 of Chipukeezy TV, Kanyari speaks to Chipu about the 310 venture, Chris Brown’s expensive concert, the recent headline-making video of himself jamming to Justin Beiber’s ‘Sorry’ among other topics.

Watch the interesting video below

Loading...
WATCH: Upcoming Videographers on ‘How to be Eric Omondi’ (VIDEO) < Previous
“I Can’t Believe I’m Alive..” Julius Yego Jubilant After Crashing Brand New Prado Next >
Recommended stories you may like: