Raila Bombshell: The ‘Secret’ Jubilee Project That Will Turn Kenya Into a Desert in 5 Years 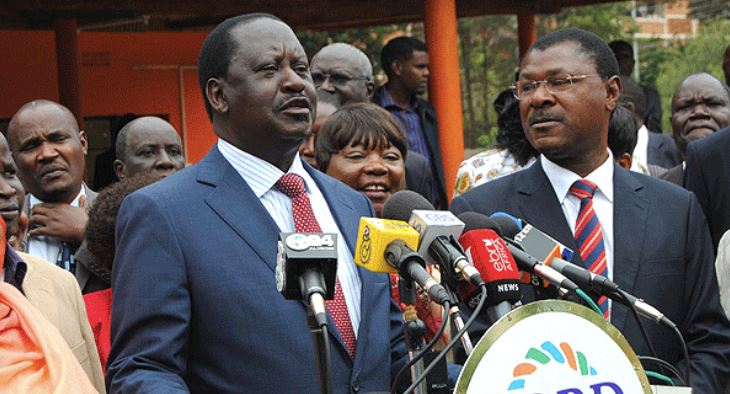 Addressing the press at his office, Raila demanded that the government stops, with immediate effect, the construction of the Northern Water Collector Tunnel Project at the Aberdare region. He said the project is being conducted secretly by the government.

He said that the project, which is allegedly being funded by the World Bank, will have dire effects on the people living on the Tana River basin, Murang’a, Garissa and Ukambani regions. He gave it a timeline of 5 years before the regions turn into deserts.

“The environmental impact report recognises the danger of the project and states that it may alter underground system.”

“It will also lead to severe loss of water in Tana River and dry up streams in Garissa, Ukambani and Tana River delta. Muranga, Garissa and Tana River will be deserts within five years of the project being launched,” he said.

Raila further accused the government of carrying out the project in secrecy without involving the people of the regions set to be affected.

“In Muranga alone, 77 species of aqua life including seven special fish species would be extinct. Water flowing into Masinga dam would also be affected,” he said.

The former Prime Minister also revealed that the project will make Nairobi prone to flooding.

State House insider Dennis Itumbi was however quick to point out that it was in fact Raila who launched the project in 2012 as Prime Minister.

The entire project to end water issues in Nairobi will be built in phases and is estimated to cost Sh160 billion.

“Phase one and two of this project will cost Sh25 billion. The government has now embarked on bold steps to develop water sources that can meet the needs of the city and the satellite towns up to the year 2035,” Raila said at the unveiling event in 2012.

Loading...
Hilarious Meme Compilation (Tuesday October 11) < Previous
How I Make Sh144,000 a Month from Managu Farming Next >
Recommended stories you may like: