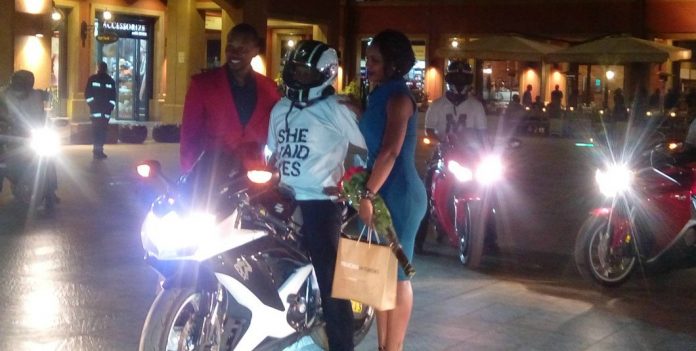 When it comes to marriage proposals, some Kenyan men are really going out of their way to make them as special as they can.

A Kenyan guy, identified as GG, has broken the internet with an epic marriage proposal at The Hub Karen.

With the help of bikers, GG pulled off a marriage proposal that brought business at the mall to a standstill.

The bikers assembled at the Mall and formed a heart shape, inside which the big question would be popped. They wore tshirts emblazoned with the name, Faith Shiru at the back

The soon to be wife, Faith Shiru, was then ushered into the heart shape, after which the bikers turned to reveal the words ‘Will You Marry Me?’ with GG going down on one knee to pop the question.

He was not to be disappointed as Faith said ‘Yes.’