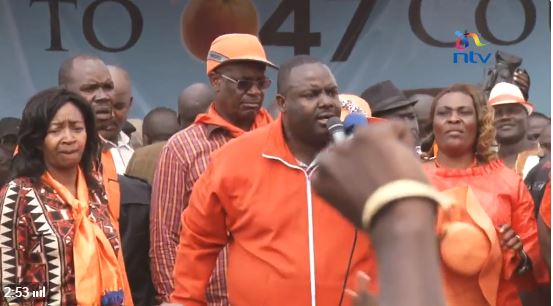 Nairobi ODM chairman George Aladwa has built a reputation of having a loose tongue.

On Sunday during the ODM rally in Mathare, former Starehe MP Margaret Wanjiru and her son Stephen Kariuki, who is the current Mathare MP were on the receiving end.

Loosely translated to, ”We elected the mother, she defected, we then elected the son, he has defected too.. they are fools.”

Aladwa then told Kariuki to officially resign from ODM if he has ‘two balls’.

Here’s the video by NTV. Viewer discretion is advised.

Loading...
This Unusual Road in France Disappears Underwater Twice a Day < Previous
Interesting Maps That Prove Our Planet Still Has Many Uninhabited Places Next >
Recommended stories you may like: