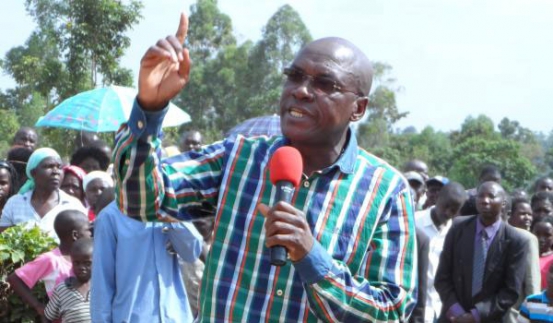 A Kakamega boda boda operator has come out to narrate how he helped senator Boni Khalwale escape the clutches of police.

The Kakamega senator had led a demo over nurses’ grievances at the Kakamega Referral Hospital when the incident happened. Police officers deployed to restore calm in the area had apparently planned to arrest the senator.

Musa Zakayo, the boda boda operator behind Boni’s escape says, “It was the bravest ride of my life, but the pay was a little bit disturbing given the risk I took.”

According to Zakayo, the senator picked him randomly at a petrol station where he asked him, “Uko na mafuta ya kutosha twende? (do you have enough petrol in your motorbike so that we can go?),” said Zakayo. “Before I answered, I noticed a crowd running towards our direction with two police vehicles in hot pursuit. The Senator hopped onto the bike then my sixth sense told me to flee.”

The senator told Mr Zakayo that they were in danger of being arrested, prompting him to do all he could to escape.

“The only way to do so was to make our escape through feeder roads and avoiding the major roads in town. I took the Kisumu-Kakamega road and warned the Senator to brace himself as I made a sharp turn towards the Amalemba slums,” said Zakayo as quoted by SDE.

“My calculation was that the police would not be able to make the turn.”

Fortunately, the trick worked even though the Senator was doubtful at first but later relaxed and started joking upon realising they had lost the officers.

However, the murram route was without it’s obstacles.

“The route was muddy due to on-going construction and a bridge on it was under repair. We could not pass. Volunteer youth noticed the Senator and decided to carry him over the mud. They also carried my bike to a clear road,” recalled Zakayo.

After the ride, the senator thanked Mr Zakayo with a Sh 1000 note, which he claims was peanuts.

“My only worry was that the Sh300 petrol I had put in my bike’s tank could run out before making good the escape. But I am happy to have successfully delivered the senator safely at Illesi where he got into his vehicle and drove off.

But I wish he had paid me better. Something close to Sh3,000 would have been more acceptable,” said Zakayo.

Loading...
“Marry Three Wives to Reduce Number of Single Women” – Francis Atwoli to Young Kenyan Men < Previous
“They Thought I Was Crazy Dating Him” – Isaac Mwaura’s Wife Next >
Recommended stories you may like: