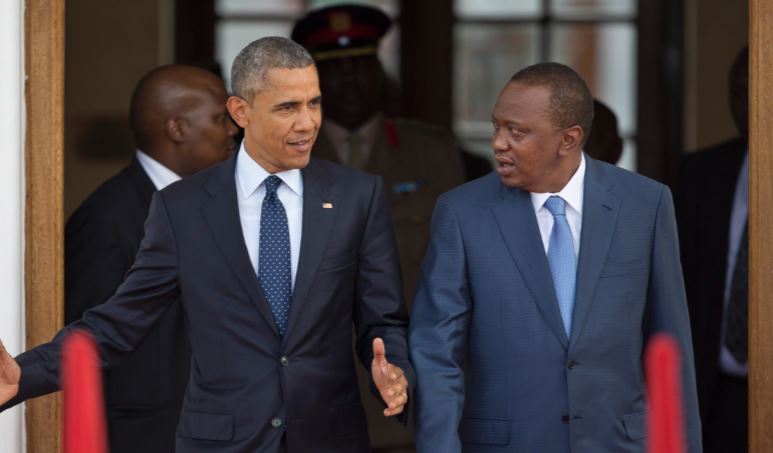 US President Barack Obama yesterday made a call to President Uhuru Kenyatta.

In a statement released by the White House, the two leaders discussed ‘U.S.- Kenya bilateral relationship.’ They also talked of the global refugee and migrant crisis, regional security and climate change.

Obama further expressed interest in continuing to partner with Kenya in efforts to defeat the Al Shabaab. He also reiterated the importance of peaceful, free, and fair elections in Kenya in 2017.

Here’s the statement from the White House.

President Kenyatta offered his strong support for the objectives of the President’s Refugee Summit and the U.S.-Africa Business Forum, and the President reiterated the international community’s appreciation for the efforts of long-term refugee hosting countries and in particular, Kenya’s forthcoming commitments to improve, among other things, refugee access to education in Kenya.

The leaders also discussed the importance of securing the entry into force of the Paris Agreement on climate change this year. The President reiterated the importance of peaceful, free, and fair elections in Kenya in 2017 and his desire to continue our strong partnership with Kenya on a range of issues, including the effort to deliver a lasting defeat to al-Shabaab in Somalia.

And this was Uhuru’s statement on the same.

I reiterated my commitment to improving the plight of refugees to President Obama who will host a Summit on refugees later this week. I assured him that Kenya continues to work towards the safe and dignified repatriation of refugees from the Dadaab camp. This will be in accordance with the norms of the international community. I also urged him to support efforts to secure Somalia & create a politically stable environment to which refugees would feel safe to return.

President Obama praised Kenya for strides we have taken towards improving the business environment. He noted a jump of 28 places by our country in the ease of doing business report by the World Bank. The improved business environment in Kenya is a matter that will be discussed at the Africa-U.S. Business summit at UNGA this week.

He further noted our pivotal role in securing peace & stability in the region & encouraged me to maintain that leadership role. We also discussed climate change & especially Kenya’s leadership in the run-up to the Climate Change conference in Paris (COP 21) last year Also the implementation of that agreement, which is one of the key issues under discussion at UNGA.

We also discussed Kenya’s 2017 elections & I made clear that I was keen to see a peaceful,open & fair process leading to a credible election. President Obama wished Kenyans well as we grow our country and look to the future with confidence.