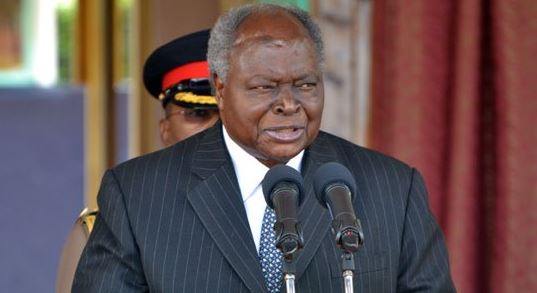 Perhaps we finally have proof that people who ‘kill’ prominent figures online have a brain disorder.

Retired President Mwai Kibaki is in South Africa for treatment. He was flown out of the country on Sunday after reportedly suffering a stroke.

The latest reports are that he is doing well and is awake and talking.

However on Monday night, social media was abuzz with news of his death. Some shoddy blogs had published the made up story and many Kenyans ran with it.

But it was the case of one Douglas Mango that may present a correlation between killing people online and having a psychological disorder.

“Ten minutes after the day of the 3rd year my last born son was born and the same day of the 38th year that we lost our founding President I can reliably report that the 3rd President of the Kenyan President Emilio Stanley Mwai wa Kibaki is dead.
Fare thee well Wuon Jimmie.
Regards to Mama Lucy… “

In his twisted mind Mama Lucy is still alive.

Before spreading news of anyone’s death, please look at the source and if it’s a news website you are seeing for the first time, be very doubtful.