“The Baby is Mine Not Ringtone’s” – Thika Tout Claims 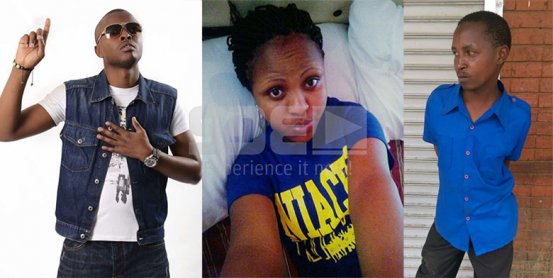 he drama surrounding gospel singer Ringtone and one Angel Nyambura who claimed the singer impregnated her, has taken a new twist.

25 year old Philip Mwaura from Thika town has come out to claim that the baby is his.

“Angel and I had been dating for years. We knew each other about five years ago when we met in Thika where we both come from. I had been truly head-over-heels in love and the romantic affair flourished to a point where we planned to get married,” Philip told Pulse.

“I was shocked when I heard news that the baby she is expecting is Ringtone’s as I am more than sure that the child is mine. The day she conceived, we shared all the joy and even discussed how we were going to break the news to her parents. However, along the way, there was change of wind and she started distancing herself from me,” Philip added.

He further revealed how Angel’s family chased him away because he is a tout.

“After Angel got pregnant, I went to their Thika home feeling delighted that the relationship was getting to a new level. However, to my shock, the family chased me away because I am a makanga (tout). Later, I was even more shocked when I heard her claiming through the media that the baby is Ringtone’s. When I asked her why she was making up a story that was disgraceful to me, she disconnected the call,” Philip says.

“This is my baby and I want the whole world to know that she is claiming it is Ringtone’s child as, unlike me, he is famous and he can pay for the baby’s upkeep. She has been trying to shut me up saying we will deal with the issue later. However, I still insist that I want her back. I want her to be my wife. I want us to raise the baby.”

When reached for comment, Ringtone maintained that he has never had an affair with the girl and that he has chosen to forgive her for dragging his name in the dirt.

“This is not the first of such allegations. I have never had an affair with the said Angel and this is what I have always said. She has been going everywhere, telling bloggers to write stories about me and her. I have been slow to react, not because I am guilty, but because I know they simply want me to join in and fuel the story. I won’t do that. Instead, I opt to forgive her,” said Ringtone.

Loading...
New Video: Phy Returns with Amazing and Soulful ‘Taboo (Taabu)’ < Previous
McDonald Mariga: I Intend to Retire and Set Up a Football Academy Next >
Recommended stories you may like: