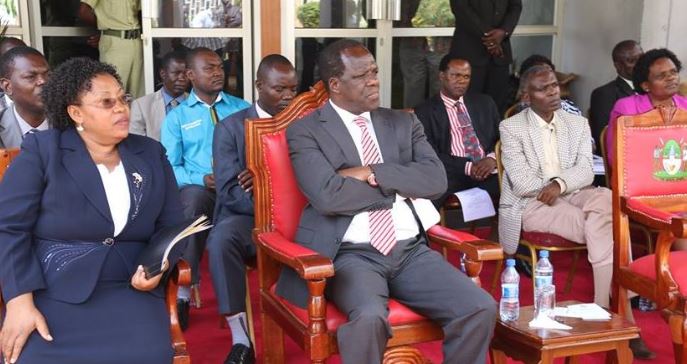 Kakamega Governor Wycliffe Oparanya has refused to be a ‘sponsor’ and has issued a stern warning to women in his county whom he says are trying to seduce him.

Speaking during a public function, Oparanya dismissed claims that he has 10 wives, but admitted to being polygamous. He said he has two wives, Priscilla and Caroline, and has no vacancy for a third one.
He advised women against parading themselves on the street in a bid to catch his attention.

“There is no vacancy for another wife. Some ladies parade themselves on streets to tempt me, but that chapter is closed for me,” Oparanya was quoted by the Nairobian.

The governor further denied using public funds to enrich himself. He said that he has been investing wisely from his days as a Member of Parliament.
“I am able to plan myself with the little I earn as my salary. If one cannot plan himself well, let him not mislead the public that I use public funds for my private life. I have been an MP for two terms and a minister and accumulated enough for my private life,” he said.

Loading...
After Living Here for 4 Years, I’m Convinced Kenyan Men Hate Their Women < Previous
Garage or Car Wash? This GK Car Hit a Garbage Truck Leaving The Driver in a Fix Next >
Recommended stories you may like: