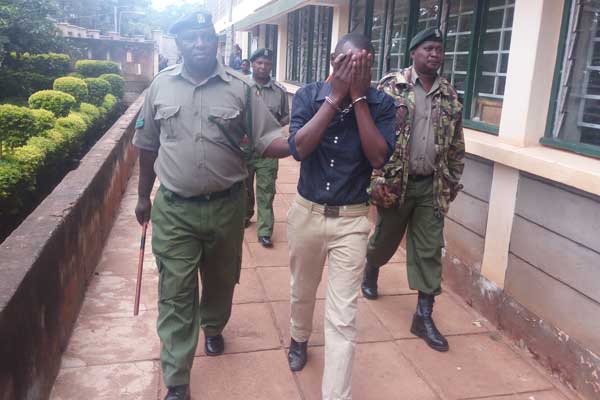 A Murang’a court has sentenced a primary school teacher to 90 years in prison after finding him guilty of sexually assaulting ten pupils.

23 Year old John Gichia Mugi was convicted of indecently assaulting 10 boys of Muthiria Primary School in Kiharu Constituency on various dates between January and May 2015.

The court jailed him for nine years for each of the ten counts.

The victims, aged between 13 and 16 years, had testified that the teacher, who was also their boarding master, would lure them and fondle their private parts after night preps as he kissed them.

Resident Magistrate Jesse Masiga said the accused deserved a deterrent sentence because he had breached the trust bestowed on him by parents, adding that the offence was too heinous.

“The prosecution had proved beyond reasonable doubt that you had sexually assaulted the boys,” Mr Masiga said as quoted by Daily Nation.

‘I sentence you to serve a 10 years prison term for each of the nine counts of sexual assault. The sentences will run consecutively,” he added as he read the sentence.

The incident came to light after one of the victims refused to be left in the school by his parents who had attended a parents’ meeting.

The school’s headteacher was found guilty of professional misconduct and discontinued from service by the Teachers Service Commission (TSC) after he tried to cover up the case.

Loading...
POLL: Take a Bullet or Be Jailed… What’s The True Meaning of ‘Eating Maize’ ? < Previous
“Nakuru County Officer Pays Me Sh 50 Every Time He Sleeps With Me” – Pregnant Class 8 Pupil Next >
Recommended stories you may like: