Pangani Diary: Junet Mohamed Narrates What Happened Inside the Cells 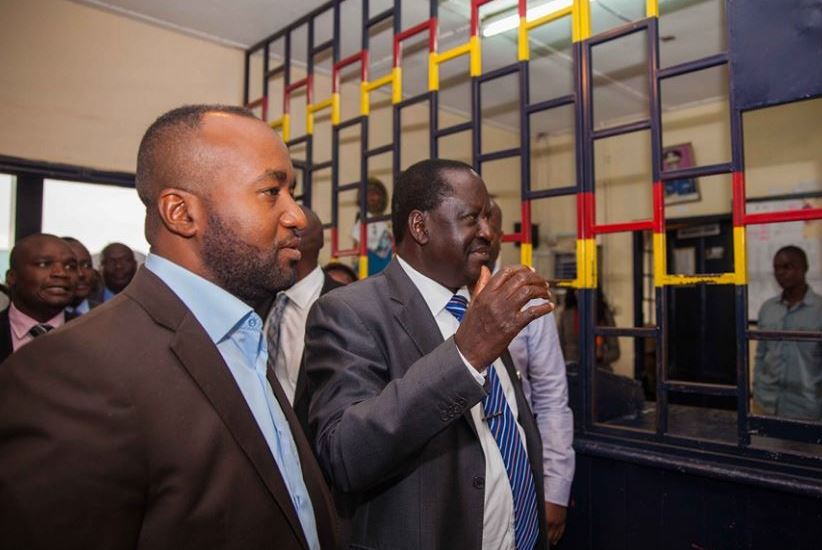 Nation – When we called a press conference on Monday afternoon to respond to death threats directed at my party leader Raila Odinga, I never knew it would degenerate into a situation of dishonour that saw me turned into a political detainee.

At the press conference held at the Capitol Hill, I together with my colleagues Florence Mutua, Aisha Jumwa and Timothy Bosire had only one intention: to express our displeasure with hate messages targeted at our leader as pronounced by Gatundu South MP Moses Kuria and Bahati MP Kimani Ngunjiri among other Jubilee functionaries and to push the authorities to apprehend and charge them in accordance with the law.

It did not dawn on me that doing so would be a crime. And that police would turn against me and detain me for three days in a filthy cell like the one I found at Pangani Police Station.

I realised hell was breaking loose on Monday at around 4.30pm when my driver notified me of an item on a radio bulletin attributed to the Inspector General of Police ordering for our arrest.

We were driving around the city when an FM radio station made the announcement; initially I thought it was the usual police threat.

I then decided to call Mr Odinga notifying him of the order by the IG to have me and several other MPs arrested.

But Mr Odinga told me: “You can’t summon an honourable MP through the media.”

He told me the police needed to write to me or seek a warrant to apprehend me. He told me; “Junet go home and sleep.”

At 6.30pm I decided to call my lawyer James Orengo for advice on the matter but he asked me to give him time to consult.
After some time he called back and reported: “Hon Junet this people will arrest you. Instead of spending (the night) in the cells come and sleep at my home in Runda.”
I thought about the offer then drove home to break my fast. I then left shortly after using a another car. I had embarked on plans to prevent an embarrassing scene during my arrest as I planned to report to the Directorate of Criminal Investigation the following day.

I then drove to a friend’s place on Dennis Pritt Road — and at 7.45pm my wife called to say police were at my home looking for me.

I stayed at my friend’s place until 1am when I drove home using a different car.

Earlier, an NTV journalist had called to request me to participate in a breakfast show the next morning. I told him police were looking for me and that if I surfaced for the interview they would have me arrested but he suggested the station would protect me and give me a safe exit to avoid arrest.
The following morning I left home at around 5.30am for town but police arrived 30 minutes later.

I drove to the Nation Centre and when my wife called to notify me of the police presence at home and that my house was surrounded, I told her to tell them that I was live on TV. In no time the Nation Centre was surrounded by Flying Squad officers led by their boss Mr Said Kiprotich. My host had no way of helping me escape. A few minutes later Mr Kiprotich called me and said: “Why are you playing cat-and-mouse games with us?”

At this point I called Raila again and he said that Orengo, Norman Magaya and Homa Bay Town MP Opondo Kaluma were going to join me at the Nation Centre. When they came I called Mr Kiprotich and asked him to come to the fifth floor where I had sought refuge at the office of NMG General Manager Linus Kaikai.
I agreed to surrender and together with Mr Kiprotich and my lawyer we agreed to drive to the DCI office in Mr Orengo’s car.

But when we walked out of the Nation Centre, one Mr John Njoroge, who was among the officers pursuing us, grabbed me by the hand and the commotion you witnessed on TV began.

We wrestled each other — Mr Njoroge wanted me to board a police car but Orengo outfoxed him and directed me to his car.

When we arrived at the DCI, I called Gatundu South MP Moses Kuria and asked him whether he was coming to record a statement too.

But he said: “I am not coming there. You finish and come to Parliament so that we can discuss this matter and finish it here.”

But a few minutes later, Kuria and his colleagues Waititu and Kimani Ngunjiri were arrested. We were also joined by Johnstone Muthama, Florence Mutua and Aisha Jumwa. Timothy Bosire and I were already at the DCI. After we recorded the statements we were driven to the Milimani Court where police applied to have us detained.

That Tuesday afternoon we were kept in the holding cells at the Milimani Court basement till 5.30pm.

After the ruling was read at around 6.30pm in which the judge directed that we be held at Kilimani, Kileleshwa and Gigiri police stations, arrangements were made to drive us to the cells. I was to be held at the Kilimani police station so I was to be dropped first. But as we drove, our car was stopped and the officers said that there was an order from above that we should be taken to Pangani Police Station.

We arrived at Pangani where we found an OCS and OCPD who were very hostile. We tried to plead for better treatment but they threw us into a dirty cell.
A bucket was thrown at an isolated corner and we were locked up. We tried to ask the OCS for food since we had not eaten anything but he said there was no food since other remandees had already had their supper at 5.30pm.

We had already been asked to surrender all our valuables including firearms before being locked up but we all hid some money, which we later used to acquire a cheap phone.

Police even dropped into our cell 10 other remandees on the second day making the situation more deplorable.

We then picked Johnstone Muthama to be our spokesman and he would occasionally confront the OCS. All of us had come together and were united by fate. We became our brother’s keeper.

On Wednesday after we acquired the phone and an Orange SIM card, I sent a text message to Mr Odinga asking him to call me. When he did, I spoke to him and informed him of the deplorable situation we were facing at the cells. My colleague Mr Kuria also asked to speak to him and I was shocked when he (Kuria) apologised to him and even asked to visit him at home when we are finally released.

Mr Kuria complained to Mr Odinga that he was shocked that his Jubilee bosses had abandoned them and reported that he saw no meaning in hating him (Mr Odinga) after all. We all spoke to Raila . Every time one of us spoke the others kept watch to ensure no policeman came around.

The phone had been brought to us by another remandee who managed to sneak it into our cells after Mr Bosire paid him Sh3,000 to buy it from the Sh20,000 we had collectively managed to sneak into the cells.
Using the same phone Mr Kuria and Mr Waititu tried in vain to access both the President and his Deputy even calling their aides to seek for help.
Jubilee side

Only Majority Leader Aden Duale responded through a text message after Mr Kuria contacted him. The text message read: “We are looking into the matter.”

Everyone appeared shocked at the condition in the cells. But Mr Waititu would comfortably sleep on the cold floor, something that amazed all of us. Our colleague Mr Bosire could not bare it. He suffered a running stomach shortly after we arrived, forcing him to frequently use the bucket. It was so dehumanising. This is something I will never forget.

On Thursday, we had a much more decent meal after we negotiated for it with the vendor. But it was brought in one bucket. Waititu would sleep every time after meals but after revelling us with stories for about two hours. All of us were excited when we heard that Mr Odinga and Mr Kalonzo Musyoka had come to pay us a visit on Thursday.

My lessons at the cells: we became one nation, there was no Jubilee or Cord inside the police cells. We were sharing information, a phone through which even our spouses communicated with us. We realised that what brings Kenyans together is much more than things that separate us.

Kuria told us how he supported Raila’s father Jaramogi in 1992 when he was a student. Waititu also told us how he accompanied President Mwai Kibaki to Bondo where he had a good meal at Raila’s home.

Ngunjiri narrated to us how he employed a Luo as the Secretary at his CDF office and talked to us about his gardener who is a Luo.

Loading...
QUIZ: Can You Spot The Letter in These Dots? < Previous
Serikali Saidia: Bungoma Hangman Is Broke And Wants Help Raising Money For Sh2,400 Rent Arrears Next >
Recommended stories you may like: