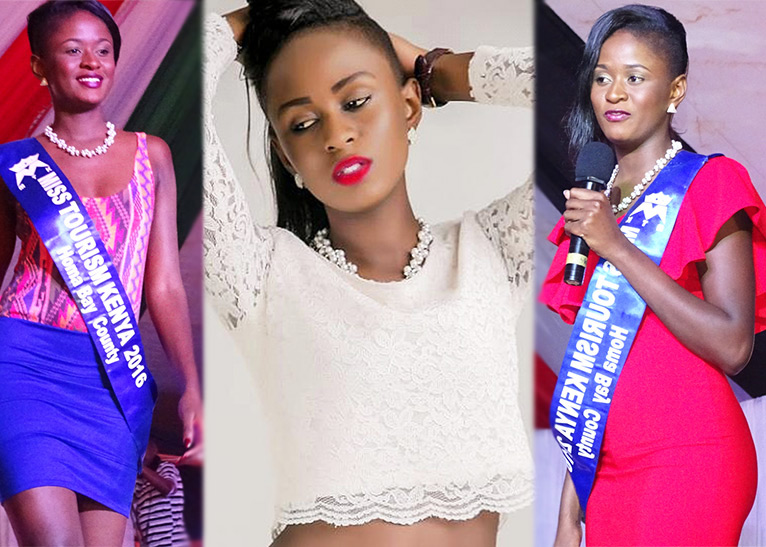 Gentlemen, newly crowned Miss Tourism Kenya 2016 Rabella Wendy Omollo is single. However, there is a catch- you have to be ambitious.

The beauty queen recently spoke to eDaily for a candid interview and revealed what she is all about.

Brought up by single mother

“I was born and raised in Homa Bay. I am the last born in a family of two (two girls). I was brought up by a single mother. My dad passed away when I was little – I can’t remember exactly when.

“My mother is one the most hardworking women I know. I never lacked anything; even in school during parents’ day, my fellow students would wonder how my mum managed to provide me with everything I needed. People had this assumption that if one does not have a father, then he or she cannot be stable in school – a school of thought that I disapproved.

“Growing up, I had a feeling that my mother loved my sister more. She resembles her completely and I resemble my dad. So, I thought she preferred her to me because of the striking resemblance between them. I however later learnt that she loved us equally.”

“I attended Rodi Township and Janeiro Junior Academy primary schools. Throughout primary education, I was always among the top performers – top two to be specific. However, when I got to high school, I slightly lost grip of top two, even top ten (laughs).

“I attended Asumbi Girls’ High School. Life was very difficult. I hated school and on opening days, I would feign sickness. I did not like the system of waking up at 3am for preps and going to bed at 11pm. And being caned was the order of the day – actually if my day ended without receiving strokes of the cane, then that was a big achievement.

“I did not like to tuck in my shirt and I detested neck ties. My hair too was naturally curly. So, my teachers would severely punish me for not tucking in, not wearing a tie and having ‘uncombed and chemical’ hair. My lips too are quite red. There was a teacher who would constantly cane me for ‘wearing lipstick.’ High school was not easy, though I was in all clubs and societies.

“I enrolled for my KCSE exams at Kaswanga Girls’ High School in Rusinga and passed my examinations.”

Journalist in the making

“I am a Second Year student at Moi University pursuing a course in Journalism and Mass Media. I deferred a semester doing several projects as Miss Tourism Homa Bay. I should have graduated, but who wants to graduate without money?

“I am still hustling. I want to transfer to a university that offers online classes. At the end of the day, I wouldn’t want a certificate without money. And I wouldn’t pursue a course that I don’t like – for example I wouldn’t do a bachelor’s degree in law. So far, I enjoy the journalism course – and despite my busy schedule, I have never missed any class.”

“Currently, I am looking for a radio job because I know I am good at it and would give it my best. However, if it doesn’t come almost immediately, I would defer another semester and concentrate on modeling. This is a chance that comes once in a life time, and I have to grab it with both hands.”

“I started modeling several years back. In primary school, I did it for fun and in high school; it is when I knew I wanted it. I would apply my mother’s lipstick, nail polish. She would beat me up, but I never desisted. I would also catwalk in class, especially when the teacher sent me to go rub the chalkboard. I got caned for that.

“A high school teacher of mine registered me in one of the modeling agencies when I was in Form One. I would go for photo shoots, but they would yield nothing. However, by the time I completed secondary education, I knew what modeling entails. I later used the photos to get small modeling contracts.”

“I floored 21 contestants to win the Miss Homa Bay 2015 pageantry. But there’s one lady I remember to date. She came for the auditions dressed in a promotion T-Shirt and sandals. She would catwalk and when she faced the judges, she made funny faces at them. I was having a bad day, but she lit it up. She knew she was not going to make it, so she just came in to entertain. We had already been told in an outright manner to come dressed in a white vest and a pair of black pencil jeans.

“Besides the amusing lady, there was another who acted like she knew everything – she’d come with ten pairs of shoes, and ‘taught’ the models how to catwalk. People were shocked when I won because I had kept a low key.

“Actually I wasn’t supposed to audition for Miss Tourism Homa Bay. My elder sister was the one to go for it – and I was to accompany her and do her make up in the backstage. Two days to the event my aunt and mum urged me to go try it out. I had just come from Nairobi and I wasn’t prepared for it.

“I accepted, though I just wanted to have fun. I hacked it, and on the final day when I was in the Top Five, I thanked God. My sister made it to the top ten. I was announced winner and I thanked God the more. Actually in my life, I am not lucky, I am blessed.

“After winning Miss Tourism Homa Bay I faced a few challenges such as lack of support from different stakeholders. But right now everybody wants to chip in and fund me.

“I have been breast cancer ambassador for a while now. I chose to roll out the project in Nairobi because the city county government was more supportive and approachable.”

“Did you see my facial reaction when I was announced the winner of Miss Tourism Kenya 2016? I did not expect to win. It is not like I was not good enough, I knew I was good. But you know the competition was stiff. Every lady was equally beautiful, everyone had brains.

“You know when you are in the backstage there’s so much tension to an extent you never listen to what the emcee says. So when I was announced the winner, I had to confirm with Miss Tourism Murang’a County if indeed I was the winner.”

Does she feel pressure to produce a more stellar performance?

“I am taking over from a lady who put Kenya on continental map Former Miss Baringo County Jacqueline Jeruto Komen. With God I believe, I would fly Kenyan flag higher. I hope to make Kenya proud. Jacquey is my friend, we talk. She was very happy when I won.”

Bella says her biggest undoing is anger. However, she has learnt how to control it – thanks to the academy she was part of in Vihiga County between June 15 and June 18.

“I have a very bad temper – it is nasty. My friends know that they shouldn’t upset me. I don’t smile when angry and my friends know when to apologize. I learnt how to control my temper at the Miss Tourism Kenya academy in Vihiga.

“My temper has made me say the worst things to people; things that I did not mean. But regardless, I would not say any negative word to my mother. When I am upset with her, I keep quiet.

“But to my man at some point, I said things to him that I did not mean.

“Some people say that I have an attitude, but the truth is I don’t want negative people around me; positive vibes only. I don’t believe in second chances. But in a broader perspective I am bubbly and cheerful.

“I am a very good chef. I enjoy cooking. My favourite meal is pilau. The meal that I wouldn’t prefer is one that has a lot of potatoes and starch mixed in one bowl.”

Bella describes her sense of style as chic yet tomboy.

“Catch me dead wearing shoes that have block or wooden heels. My style is easy, chic, tomboy, sassy and simple. I often dress according to my mood.

And which look does she prefer on her man?

“For dates, I love a man dressed in a classic manner – well fitting suits. I hate it when a man sags his pair of trousers. Too many blings and sagged jeans trousers can’t woo me. Many tattoos are a big no for me.

“I am not seeing anyone. It’s out of a personal choice.”

“I love a man who fears God. He should be classic. I love a man who is consistent – consistency is very sexy. Someone who treats me right and respects me. I do not like a man with roving eyes; a man who hits on my friends when I introduce him. When a man does that, I wouldn’t even term that as disrespect but sheer shame he’s put on me.”

And would Bella date a broke man?

“People say women are gold diggers but the truth is I have worked so hard to be where I am to date a broke and ambitionless man. I have not made it yet. If I date a man who has no goals, who shows no commitment to head there, what will become of me?

“I can date a broke man who has dreams and shows the drive to get there – but a man without any ambitions, is not my type. I don’t care how cute the man is.”

“There are good Kenyan men that I know of. But the majority paint the image of Kenyan men in bad light. I think it is influence from negative people. There’s a predominant perception among Kenyan men that if he doesn’t become a bad boy and bank many women, he wouldn’t be a hero in his boy group. That explains why when you start dating some men, they start off as good people, but along the line they change just to fit in in their boy group.

“With time, the glory of Kenyan men will come back. I know friends of mine who date good men.”

Advice to the youth

“Never put yourself in a class that you don’t belong. You can go broke trying to make yourself look rich. And even if you are rich, keep it simple and work harder.”

“I am planning to launch my own modeling agency so that I protect fellow women from preying men who own agencies and often ask for sexual favours from women before giving them contracts. I know how ladies struggle to raise money for registration to agencies and they end up in the cold. With my position, I would be able to create an avenue for them to feel safer and earn a living.”

Loading...
Throwback: Jimmy Gait’s Hello Cover < Previous
Can You Guess Which Jewelry is The Most Expensive? Next >
Recommended stories you may like: