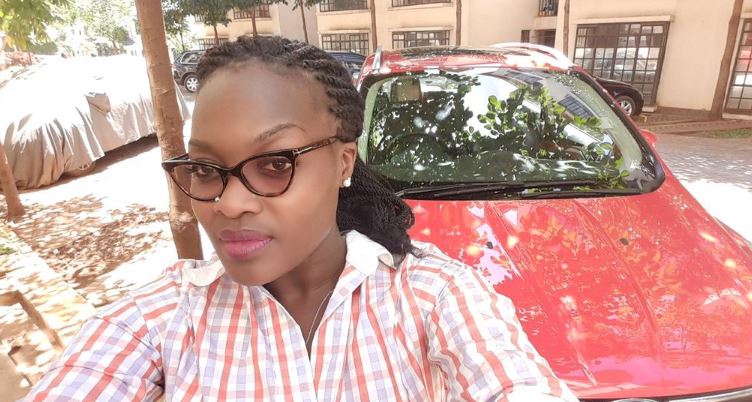 Media personality Angela Angwenyi is the latest to be implicated in the National Youth Service fraud.

The Auditor General has released a report outlining how Kenyans may have lost Sh1.9 billion in the NYS saga, with Josephine Kabura receiving the bulk – Sh1.3 billion.

In her affidavit, Kabura admitted making the transactions with the then Devolution Cabinet Secretary Anne Waiguru.

Apart from the names of beneficiaries we already knew, another one has come to light; That of Angela Angwenyi.

Last year, the media personality quit radio after 10 years in the industry. She was by then hosting ‘State of the Nation Show‘ on Nation FM.

The late Jacob Juma first made the allegations in October last year, but that did not even make blog headlines.

“ANGELA ANGWENYI defrauded NYS sh90 million using a company that she had registered just 30 days old. The company is known as OUT of BOX SOLUTIONS. She was introduced to NYS by CS Waiguru. She used the new law that was enacted to empower youth and women known as Access to Gov’t Procurement Authority to get the contract and loot NYS. Ann WAIGURU is not as clean as i thought. She bought a house recently in KIHINGO Gated Estate in Kitisuru for sh150 million in cash. Where did she get sh150 million in cash given that she has worked for 29 months as CS earning sh1m per month which equals sh29m only? Corruption is ripping off our nation. Stand up ye good men for thy country, Kenya.” 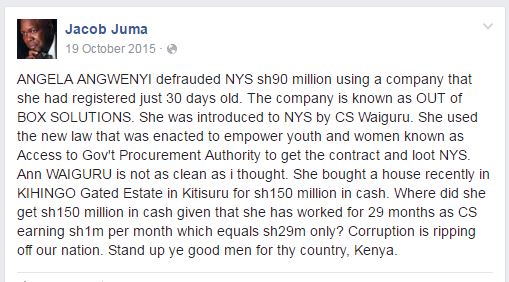 The Auditor General’s report now confirms that Angela’s company ‘Out of the Box Solutions’ is being investigated for what seems like a grossly overpaid publicity contract with the planning department.

Reportedly, the cost of the contract was Sh302 million.

The Auditor General further notes that a suspicious payment of Sh90 million was made to Angela’s company on August 13, 2015. Apparently, her bank got suspicious with the sudden massive transaction that they had to call the planning department to confirm.

Angela Angwenyi was a big defender of Anne Waiguru.

We cannot establish whether her alleged huge windfall had anything to do with why she quit a fairly stable radio job.