10 Things You Did Not Know About Citizen TV’s Patrick Igunza, Including Stint As A Tout 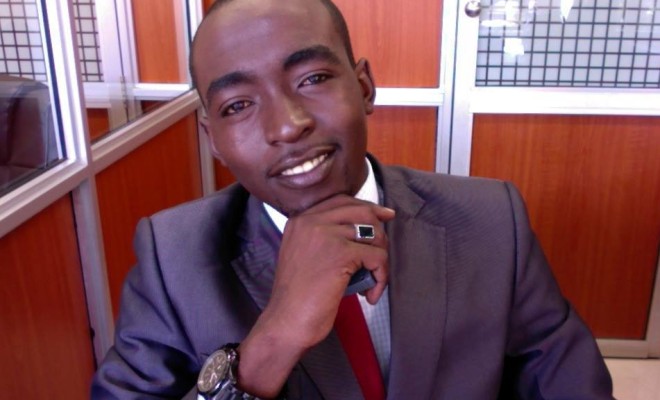 Patrick Igunza is one of the more accomplished business reporters in the country.

He is best known for his detailed business reports and his expertise in making business news sound thrilling.

When he is not gracing our tv screens on Citizen TV, Igunza is quite the family man. He spoke to eDaily and told his story.

Here are 10 things you probably did not know about Igunza:

“I am the last born in a family of seven (four girls, three boys). I was born and bred in Nairobi,” he says.

But just where exactly in Nairobi?

“In the leafy suburbs of Karen. My father used to work at the Karen Country Club and my mum used to work at Kazuri Beads. I had the opportunity to grow in that neighbourhood. Needless to say, we were not as rich as sections would think. My parents were just workers who were earning peanuts for lack of a better word.

And his life as a kid?

“It was quite awesome. I never encountered most of the challenges that children born in other areas face.”

2. Had a taste of life in Kibera

Patrick Igunza had a taste of Kibera life – after his parents became jobless.

“It is in Kibera that the reality of life dawned on me, shortly after my primary school education because my dad had to retire from the Karen Country Club and my mum stopped working almost immediately. That meant we had to relocate to Racecourse in Dagoretti,” he recalls.

“When I finished Primary School, my brother and sister were still in high school, and so my mum told me that they were financially incapable of accommodating a third child in high school. So, they gave me an option of either repeating Standard 8 for my sister to clear secondary school, – or get admitted to any cheap school that was available.

So, which option did he opt for?

“My mum happened to know one of her friends who had a school in Kibera. She informed her about the challenges she was going through financially. The friend of hers accepted to admit me in her school at no cost. That is how I ended up in St. Gabriel’s near Lindi in Kibera.”

“After my sister completed her secondary education, I was transferred to Yatta Mixed Secondary School in Machakos. My elder brother introduced me to then Yatta Secondary School Principal. I wanted to be oriented in a school that he knew well. I had a tiny frame. So, I feared being bullied.

Igunza is a lively, yet cheeky persona. And this stems back to high school.

“I wasn’t a good boy at all, though I joined in as a Christian. I was morally upright in Form Three only. One year down the line, I backslid and after backsliding, I went into drinking habits. I then developed a liking for women company. I was popular in school because I used to be a performing artiste.

“I was a Hip hop artiste. During school festivals and talent shows, I would entertain the gathering. My liking for female students never put me in good books with the school principal. He perceived me as a womanizer. I remember he, one day, told me: “I don’t like you Patrick because you are a womanizer.”

“That never made me to turn away from my female friends. The funniest bit is that I never had a girlfriend, until very late when I was almost completing secondary education”

And that girlfriend turned out to be his wife.

Despite the challenges he faced in secondary school, he says he acquired key life skills that he is forever grateful for.

“Yatta High School helped us to shape our future. It was tough to have water there; sometimes schools would close earlier than planned because food has run out. It is there that you realise you want to go home, but you don’t have fare. The experience made us learn how to hustle.”

And what was his hustle?

“I remember me and a group of friends – about four of us – would go and become touts between Thika, Kithimani and Matuu. We would do what they referred to as ‘squads’ and then get some money,” he recalls.

“Friends of mine had girlfriends and the ladies too needed fare to go home – you can imagine doing one or two days and the earnings are given to ladies first. That is how we learnt to hustle.”

“I never looked at my difficulties growing up as an impediment towards my future. I knew I would grow up to be who I want. I wanted to be an international Hip Hop artiste.

“I tried to nurture that talent in high school. Because of the hard nature of life shortly after high school, most of my time I spent doing odd jobs in the neinghbourhoods in Karen, I got disoriented in pursuit of my talent. My music talent, nonetheless still exists. I believe one day, even if it is not for money, I will record a hip hop hit.”

“I attended Multimedia University now – then the Kenya College of Communications and Technology.”

“Life was crazy in campus as I had to juggle between being a parent and being a student. I have three kids and my first child was born in 2007. I was 22 years old and a Second Year certificate student. My son was born a day to my birthday. I had to start becoming a father and a student at the same time. You can imagine: here you are being provided for, and you have to start providing for someone. That’s when I learnt how hard or tough life can be, and that is where my entrepreneurial skills got nurtured.

“My mum was accommodating and she never chased me away when I told her that my girlfriend was pregnant. She just said: “Don’t mind about that. Just focus on your studies and all shall be well.”

“I had to stop boarding and became a day scholar. In 2009, my second born was brought forth; slightly before completing my Third Year. Throughout my college I was more of an entrepreneur than a student.

“I bought a camera and would take photos and sell to students and other members of the public. It never stopped until I completed my studies.”

8. First intern from MMU to intern at mainstream media

“My hustling helped me get internship at Citizen Television. I was the first student from Multimedia University to intern at the acclaimed TV Station. I was also among the first interns to go on air at Citizen TV.”

“The entrepreneurial aspect in me helped me get the desire to learn business journalism and its jargons.

“When I joined Citizen TV as an intern, I was on the general news desk. But somehow, I got sent to business functions severally. Technically it was quite challenging. Practically, my output and input was being appreciated. When I ran away from the business desk, I was called by my then bosses Mercy Oburu and Bonny Mutakha who told me from then henceforth, I would intern on the Business desk. I got baptized by fire. I had to learn how to be a business reporter.”

“I am married to one wife; the mother of my three kids. That is the best thing ever. She stuck by me, she just decided that she wouldn’t leave me. She schooled with me in high school. In 2005 she moved in with me, immediately after high school.

“We are talking about a massive 11 years.

Loading...
“My Baby Mama Magda And I Broke Up Almost A Year Ago” – Jaguar < Previous
Everything You Need To Know About Hot 96FM Presenter Monique Next >
Recommended stories you may like: