Was Nairobi Wire Hacked for Real..? Here’s the Full 411 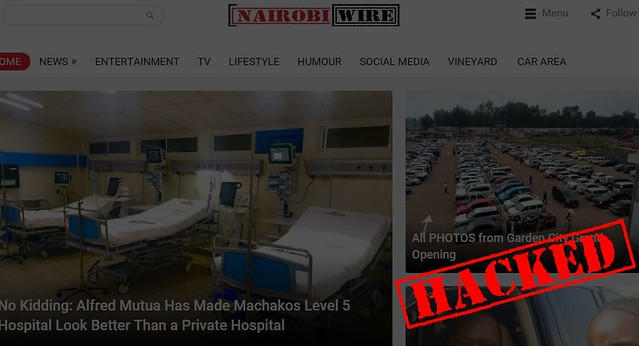 We were away for several days, and many of our readers were getting worried.

Some people thought we were hacked, while others thought we had simply closed shop. Neither of that happened and now that we’re back, here’s the full story.

Before our ‘switch off’, Nairobiwire.com had been experiencing regular inaccessibility erros (503 errors). Pages would either fail to load completely, or do so after repeated attempts. Our readers complained and we agreed something had to be done.

An upgrade like ours would have required a complete migration from Godaddy servers, since were already using maximum resources. We agreed that while Godaddy was giving us problems, they were not bad enough to warrant a move to another provider.

Since they offered a higher hosting plan with better resources, we saw it wise to just move our files to the new plan. However, moving several hundred GB of files and databases over the cloud is not an easy task. Things can go completely wrong in the configuration, and honestly, not a lot of Kenyan Internet Service Providers can guarantee a stable connection to accomplish that.

Lady luck was however on our side on this one. For a small fee, Godaddy offers migration services within their servers. We thought since they are the professionals, and because blogging is our core business and not server management, we can have them do it for us.

The files were to be moved in the background, and normal services would not be interrupted (interruption would only occur during domain name propagation). It took them less than 3 days to copy the files and setup all the databases and other configurations. That was about two days before the Madaraka weekend.

The process of having ‘www.nairobiwire.com’ point to the IP address takes a maximum of 48 hours. This is called domain name propagation. Normally, it takes just a few minutes, but in our case it was to take much longer because of some other technical details I’ll not get into.

During the name propagation process, DNS servers across the world take different times to point to the right IP address. What this means is that one person will see the old version of the site, while another will see the new version.

Nameservers and IP jargon were however the least of our worries.

When we technically moved the traffic to the new version, every red alert was triggered on our dashboard. The site homepage became disoriented, the loading speed went up considerably, and we were locked out of our publishing dashboard.

On Godaddy’s advise, we had migrated to a plan which we believed would solve all our ‘inaccessibility’ problems, but ended up making things worse.

The problem was that the plan they had migrated us to allowed 200,000 files (still don’t know what exactly that is). Nairobi wire had close to a million, but that was never mentioned.

We had to move fast and got Godaddy on phone. They admitted their fault and offered to refund us the migration money. It was however clear to us that if this was not resolved fast, much more money was at stake here.

In our minds, we had to options, reverse the cancellation of our previous ‘503 error’ prone plan, or immediately upgrade to a superior plan. Godaddy however shut down option one, telling us that it was irreversible. So we could only get a superior plan.

At this time, their unprofessionalism had started getting into our nerves. We decided that we’ll pay for a superior plan but instead of paying for an entire year, we would pay for only a month, so if they messed again, we could walk out without much losses.

Once again, we also paid them to migrate us to the superior plan. I thought that since they had technically taken us offline, they would atleast offer to do it for free, but what do I know.

All we needed to do was wait for their completion email. The first migration had taken 3 days, so we thought we would be back online on Tuesday… After a long Madaraka weekend, probably not many of our readers would notice.

3 days passed, Nothing, and multiple calls and live chat sessions with their tech support did not help. They had technically held us at ransom and were not giving any demands.

Their support has been trained to mostly give template answers, and were very unhelpful. The first migration (which was not urgent) had taken 3 days, the second one was dragging forever, and this really pissed us off. You know how there’s that thing you cannot recommend to your worst enemy, that’s us and Godaddy. If your traffic is destined to grow, they’ll screw you eventually.

The migration was eventually completed 12 days later (this past Friday) two days outside their 10 days maximum, and they offered $20 for the delay, and the improper state they handed the site back to us.

Was $20 supposed to be lunch money, or compensation for the hundreds of dollars we lost due to their incompetence? Well, we’ll never know.

It’s unfortunate that we’re still with them, but in the next few days, we’ll be making a better calculated and ‘uninterruptive’ move to a different cloud server provider, who actually knows what they’re doing.

It would be our wish to host with a Kenyan company, but none of the local hosts can handle our traffic or any major website in the country for that matter. Most of them are just resellers of major hosting companies in the US, and are only capable of comfortably hosting a 3 page website with 50 readers a day.

Godaddy may be the biggest web host in the world, but they’re better at making Super Bowl adverts than hosting sites. If you’re with them, run before your traffic grows.

Loading...
Video of the Day: Horrific Moment Arm Wrestler Breaks His Arm on Live TV < Previous
The Briefs: Monday June 15 (The Hottest Stories on the Internet Today) Next >
Recommended stories you may like: