Gay or ‘Monk’.? This is What Kenyans are Thinking of New CBK Governor… and the Truth 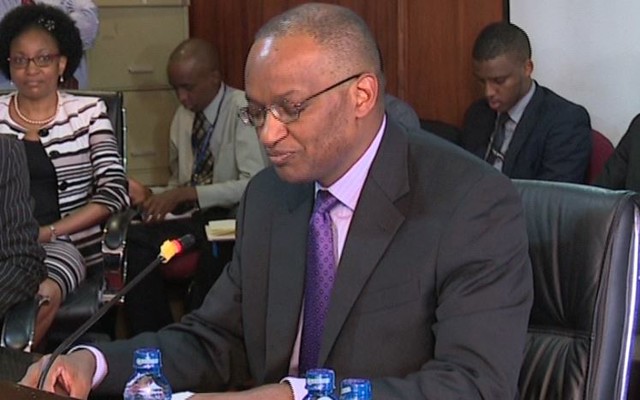 Everyone was thinking it but only Makau Mutua had the guts to mention it. Did the marital status of Central Bank of Kenya Governor nominee Dr. Patrick Njoroge come up because the MPs thought he was gay?

Dr. Njoroge admitted that he was single, saying that he was “single by choice”; a short, clever answer that brought to a halt what was potentially a long line of related questions. Our MPs are known to dwell on non-issues, and in this particular case, I’d be curious to know how they thought his marital status would strengthen the Shilling.

On Twitter, Standard columnist Prof. Makau Mutua (himself accused of being gay, most recently by David Matsanga last night) stated it as it is; what really motivated that line of questioning. 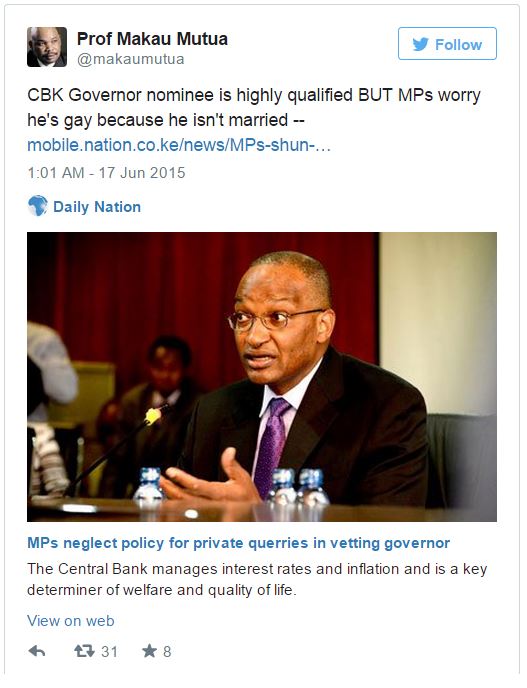 This is not the first time sexuality has come up during a high profile vetting. Chief Justice Willy Mutunga was forced to explain his studs before getting approved.

Perhaps the vetting role should be taken away from parliament, since they are mostly biased, interested parties, or simply don’t know what they should be looking for.

But to clear up the air, there’s a perfect explanation as to why Dr. Njoroge is single at 54. According to Nairobi News, he is a staunch member of Opus Dei; an institution of the Roman Catholic that has strong beliefs on marriage.

It is described as the most controversial force within the Catholic church.

Apparently, the new CBK governor is the brother to Opus Dei bishop Anthony Muheria – a close friend of President Kibaki who is the current Kitui bishop and was at one point appointed by Kibaki to be a member of the Judicial Service Commision.

Still on Dr. Njoroge, here’s how Kenyans reacted to the whole saga.

Patrick Njoroge is single at 54 and a CBK governor nominee, see the milestones you can achieve without a wife?

An MPig offered CBK Governor Nominee his sister? What would a brainiac like Dr. Njoroge find in an idiotic MPig relative? #IdiotGenes

How the CBK governor be avoiding females pic.twitter.com/iToyiMuxZQ

MPigs were more concerned CBK Governor nominee has no wife than his credentials…. Any episode of how shallow minded the idiots are.

Now when your parents start pressuring you to bring a girl home you can tell them the CBK Governor is 54, straight & single. Thank you Jesus — Ike (@Nyagah_) June 17, 2015

Apparently the CBK governor being single at 54 means that people are now questioning his sexuality. Maybe he just doesn’t want to be married — Tiffany Kagure Mugo (@tiffmugo) June 16, 2015

I thought there’s a saying that ‘All men are taken ‘ so the CBK Governor nominee is an exception?

Ladies in celebratory mood after CBK Governor declares he is single!!

The appointed CBK governor is single at 54 by choice. Am not even half his age and idlers are already whispering

CBK governor took ‘beautiful ones are not yet born’ too seriously

Any staunch Catholic chic wishing to marry CBK Governor should try her luck. I know many Opus Dei numeraries who eventually got hitched.

Strange that instead of interrogating his abilities in the BOARDROOM, our focus is on #CBKgovernor prowess in the BEDROOM, Re: Single — Mukurima (@Mukurima) June 17, 2015

Now when your parents start pressuring you to bring a girl home you can tell them the CBK Governor is 54 straight & single Thank you Jesus!

Loading...
Hilarious Trending Images This Thursday < Previous
“Here Are Some of My Achievements in the Last 2 Years” – Kidero Next >
Recommended stories you may like: