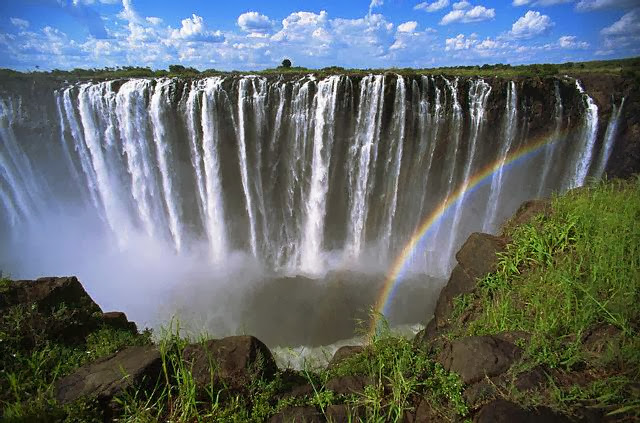 Zimbabwe’s ruling Zanu PF party plans to rename world renowned tourist attraction, Victoria Falls arguing it cannot continue to honour the legacy of colonialism and Queen Victoria, whom the falls are named after.
At its conference last week, President Robert Mugabe’s party said it did not make sense to continue having colonial names and instead these should be replaced by local ones.
“Institutions bearing colonial names must be changed and be given indigenous names . . . School syllabuses must also change,” the party resolved.

“We should teach our children about Mbuya Nehanda, Sekuru Kaguvi, General (Josiah Magama) Tongogara and other gallant fighters of our liberation struggle.”
Victoria Falls was named after the British monarch, Queen Victoria by a missionary, David Livingstone, the first white person to set sight on one of the world’s seven natural wonders.
At independence in 1980, Mugabe’s government set out to rename most major towns and landmarks, although a number were left untouched.

A leader of an association of ex fighters for Zimbabwe’s independence, Jabulani Sibanda was on Tuesday quoted saying there was no going back on the resolution.
“We still have institutions like Allan Wilson School, what an insult, considering what that man did to our country.

“David Livingstone was not the first person to see the Victoria Falls, they (the falls) must be rebranded Mosi-Oa-Tunya. We have soldiers living at KG (King George) VI (Barracks),” he thundered.
“How can we have our barracks continue to be named after a foreign king?”
But there are fears this could have a negative effect on tourism, at a time the country is desperate for foreign earnings.
But a belligerent Sibanda maintained that if European tourists want to see the legacy of Queen Victoria “her grave is there in England and they are free to do so. Very soon they would be landing at Robert Mugabe International Airport”.

Some in Mugabe’s party have for long called for radical action to rid the country of its colonial past, but have surprisingly been stopped by the country’s 89 year old leader.
A lobby group within Zanu PF once wanted to have the remains of Cecil John Rhodes exhumed from the Matopos Hills and thrown into a river.

Before independence from Britain in 1980, Zimbabwe was called Rhodesia, after Rhodes.
Another group wanted the removal of David Livingstone’s statue from the Victoria Falls, but again their efforts came to nothing.
More recently, the government tried to rename all schools with colonial names after what it terms liberation war heroes, but this failed spectacularly and it was forced to abandon the plan.

Loading...
Arsenal To Play in Kenya in July Next Year – Sam Nyamweya < Previous
Nairobi Parking Fees To Be Increased To Sh 300 Next >
Recommended stories you may like: