Forget those Friday the 13th horror stories, here’s some good news.
The government has announced that December 13th, which happens to be a Friday, will be a holiday. Kenya will be celebrating 50 years of independence and the government has added an extra day to carry on the celebrations, expected to reach their climax on 12th. It has been reported that over 11 heads of state are set to attend the ceremony at Safaricom Stadium Kasarani. More are expected to confirm in coming days, with Sports and Culture secretary Hassan Wario optimistic of having 20 heads of state.
President uhuru is set to lead the main celebrations. The occasion will be graced by musicians and art groups and will take place in the newly renamed Safaricom Sports Stadium which is a spectacle to look at especially at night.

“His Excellency the President has rewarded all our efforts with a public holiday on December 13 so that Kenyans can put their best step forward as they dance to the tune of our celebrations of 50 years in every corner,” said Mr Wario. “During this period, we are going to mark the stability of our growth, hard work and commitment to this country.” he added.

There was speculation that the government would give Kenyans a 3-day holiday starting from December 11, but the cabinet secretary dismissed that as false rumours.
The Dec 13 date is however official, having been gazetted on Monday. 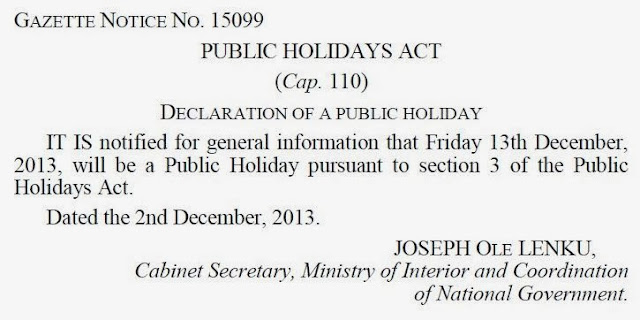