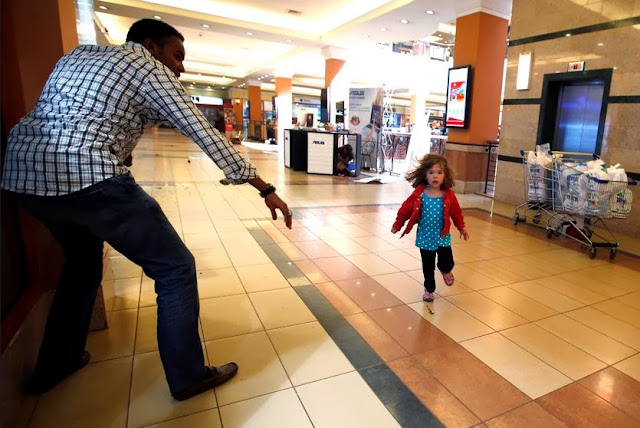 During [email protected] celebrations on Jamhuri day next week, a lot of men and women who have played a key role in Nation building will be honored. The list has been compiled from banking to education and even politics.
An unlikely group of Kenyans is also expected to recieve national honours – the Westgate heroes.

Constable Benjamin Chemjor was captured by photojournalists carrying a baby on one hand and a gun on the other. His efforts to save the little child and other people trapped in the mall has earned him the ‘hero’ title.
He has been named among 261 others to be honoured during the Jamhuri Day celebrations.

In an interview after the rescue, he commented about the incident, “I am a parent and it felt like it was my own four-month-old daughter I was rescuing”.

Together with Lower Kabete police chief Stephen Lelei and Sergeant Tawfiq Baya Chejor will be honoured for spearheading the first rescue operation before enough police had arrived.
They will all receive a silver star together with the son of Senator Yusuf Haji, Abdul Haji.
Haji is probably the most recognized Westgate hero, after his pictures were splashed on news websites, TV, and newspapers worldwide.
The iconic picture of him extending his hand to a little girl has even been selected as one of the best photos of 2013 by Reuters.

The five Kenya Defence Forces soldiers who died during the attack have been nominated by the Office of the Deputy President to receive the honour of Silver Star posthumously.

Inspector General of police David Kimaiyo will receive the honour of moran of the Order of the Golden Heart. Deputy Chief Justice kalpana Rawal and Richard Mwongo have been nominated for the Elder of The Order of the Burning Spear among 26 other nominees.

Loading...
Pope Francis Reveals He Was a Bouncer at a Nightclub in Buenos Aires < Previous
PHOTOS – Here’s That Miss Tourism Murang’a You’ve Probably Only Heard of. Next >
Recommended stories you may like: