No Recce as 900 are Held Hostage By Gunmen In Turkana 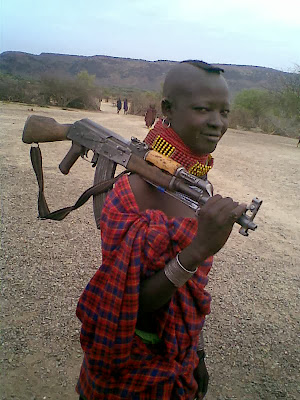 Armed Pokot militia have sieged Lorogon village in Turkana taking upto 900 hostages. Officials say that the heinous act is as a result of territorial disputes among local communities.
Most of the hostages are women and children.

Police camps nearby were not spared either as they were also attacked on Saturday. The militia engaged the policemen in a heated exchange of fire and it appears our law enforces were overwhelmed.

It reported that mediation talks between the Pokot and the Turkana are due to be held on Sunday.

Turkana governor told the media that the village was facing a humanitarian crisis after being cut off for four days.
“More than 900 people, mostly women and children, cannot go out to look for water and food because they are surrounded by gunmen,” Josphat Nanok was quoted by the Kenyan Press Agency as saying.
The National Disasters Operations Centre said the siege “follows a border dispute” between the two sides.
“Police officers and reservists [are] combating the bandits in Turkana, but there is heavy resistance,” it said in a tweet.
Clashes between the Turkana and Pokot tribes tend to be over allegations of cattle rustling.

There have been calls for the government to send KDF to the region, to finally put the insecurity matter to an end. It will have to be seen whether this will ever happen.