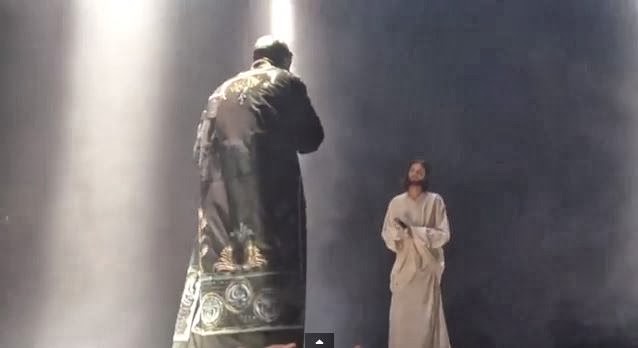 Kanye West has been known for his antics. Some of them he genuinely believes in, some of them we assume are pure antics. On the Jimmy Kimmel Show recently he claimed that he never does anything as a publicity stunt, that it is all him.
On that same show he compared himself to a long list of greats like Jesus, calling those people his heroes. He also named his most recent studio album Yeezus, an obvious reference. Aside from having a song titled “I Am A God,” he also has this lyric:

“I just talked to Jesus, he said what up Yeezus, I said sh– I’m just chilling, tryna stack these millions, I know he’s the most high, but I am a close high…”

While performing in Seattle recently he invited the man himself up on to stage, or at least an actor portraying him. It is hard to make out exactly what Kanye is saying over the crowd in the beginning of the video. It sounds like he is asking if that’s him and saying he has been looking for him his whole life.
Jesus says he found Kanye it sounds like.
Then Kanye said he can’t believe that he said something in front of Jesus. The whole thing is weird and a little unnecessary. I’m sure he is going to receive some bad press for this. The skit ends with him going into the song “Jesus Walks.”
Here’s the video

Margaret Kenyatta Calls For Early Screening And Treatment Of Cancer
Loading...
The Latest