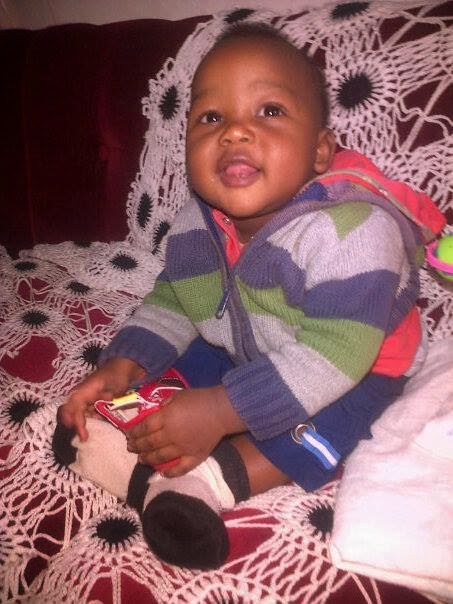 ALL I WANT IS JUSTICE.

My name is Elijah Okwena. I am a loving brother,uncle and husband. And also a father. A father of a dead child.

I am happily married to my extremely adorable wife,Linda Moraa. A 22-Year old student at Chuka University.

Linda and I were blessed with a bouncing baby boy in January,2013. And we named him Brayden Nyabuto. Brayden was our life ; He binded us,brought us closer as a couple and cemented our joy.

Our lives revolved around Brayden. He was the PERFECT gift. From a PERFECT God.

Brayden never had any medical complications since birth. And the previous immunisations that we conducted on him when he was 6,10 and 14 weeks old had all been successful.

But on September 25,2013,I and my wife decided to take little Brayden to hospital for a measles immunization.

I was driving. And Brayden was sitting on my laps. Laughing and playing around. And at one point,he even took the steering wheel of the car,smiling jovially.

We were taking our son to Jordan Hospital. A 40-bed PRIVATE HOSPITAL in Kitui Central.

At Jordan, a nurse came in to inject my son with the measles immunization needle.

My wife and I were both seated there. Watching the nurse inject my son with a clean,sharp syringe.

When he was injected,Brayden cried. But I took it as normal.

But when he continued crying,I asked my wife Linda to breastfeed him.

But he suckled for just a few minutes…And then he looked at me,smiled and went quiet.

My heart started pounding. I was in panic mode.

We then noticed he was breathing heavily.

Quickly,a doctor in the next room was called and my boy was rushed to an emergency room.

Unfortunately,efforts to resuscitate him failed.

He died just 10 minutes after the injection.

My life halted to a screeching stop!

My wife and I almost went crazy.

Just 10 minutes ago,we drove into the Jordan Hospital’s compound with a healthy,bubbly baby boy! And now,10 minutes later,we were leaving with a corpse!

After days of excruciating pain,anger,distress and agony,we sought to DEMAND answers as to WHY and HOW our son died.

A pathologist report by the Government Pathologist,Dr Johansen Oduor,indicated that there were NO visible injuries on his body.

Though his brain was SWOLLEN.

But what shocked Dr Johansen Oduor most,was the fact that Brayden’s body had been EMBALMED even before the investigations.

It was concluded that the medical staff at Jordan Hospital embalmed my son’s body with a motive. An EVIL motive!

They did it to frustrate the investigations. And cover up their negligence.

It was an attempt by the hospital to interfere with the condition of my son’s body,an indication that they could be hiding something.

Our attempts to get answers and explanations from the hospital Director,Dr Joshua Matu have been completely unsuccessful.

Dr Matu wouldn’t speak with Us. Or provide answers.

It later turned out that Brayden died as a result of a drug overdose. A measles overdose.

And it also turned out that the nurse who injected my son with the fatal drug had only been at work for just 3 weeks.

She wasn’t a PROFESSIONAL.

I have lost a son. Even before he celebrated his FIRST BIRTHDAY.

Am crushed beyond repair. And so is my wife.

No parent should ever go through what I am going through.

All I want is JUSTICE. Justice for Little Brayden.

And action should be taken against Jordan Hospital. Immediately.

Someone MUST face the Law.

I wont rest until its done.

And we must ensure that NO other healthy child dies away as a result of negligence,incompetence,carelessness or the arrogance of a nurse or doctor.

Neither can my wife.

Loading...
Study Confirms That Men Love Looking at Women’s Boobs < Previous
PHOTOS From The Umoja Train Crash This Morning Next >
Recommended stories you may like: