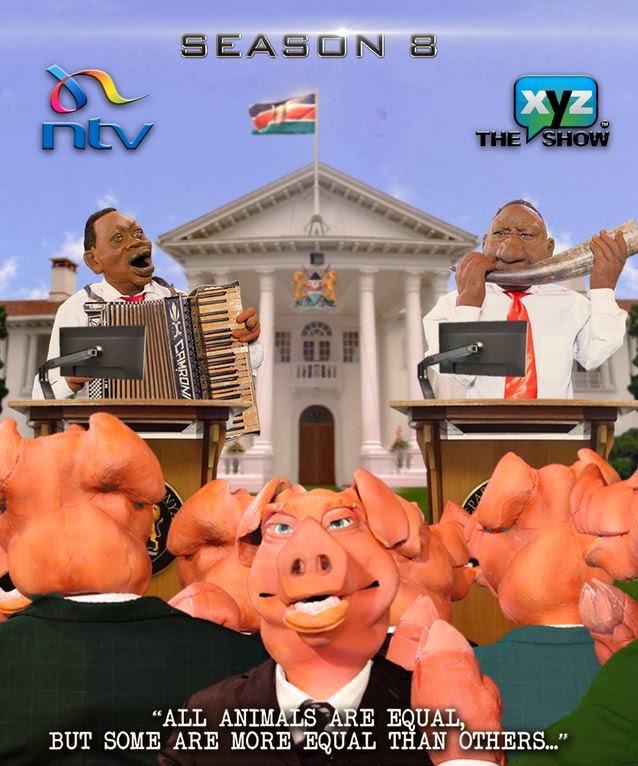 On Sunday, political satire TV show, XYZ, aired its 100th episode.
The show has come a long way, and has over the years established itself as the most watched political satire show, and the only one of its kind in the country.
Currently in it’s 8th season, XYZ show has aired on Citizen TV, Kiss TV and now NTV.

A comprehensive look at national security in Kenya on episode 100 of The #XYZshow!
— xyzshow (@xyzshow) October 6, 2013

On its 100th episode, the show focused on national security, coming soon after the Westgate attack. President Uhuru – the puppet, bashed his security chiefs, namely Gichangi, Kimaiyo, Omamo and ole Lenku – who had his full Utalii Hotel gear. Ruto was also not satisfied with their performance, and told president Uhuru to send all of them home. He also said that intelligence should be share 50-50, just like everything else.
The 100th episode included a congratulatory message from the president and his deputy. It even got ISO certification.

Finally, the show reunited Shebesh and Sonko in their political hit segment. This time the song was Kenya’s National Anthem.. probably their best political hit yet.

You can watch the episode on Buni TV

Loading...
This Is What Happened When Safaricom Network Went Off Last Night < Previous
Samsung Launches World’s First Curved Display Smartphone… Galaxy Round Next >
Recommended stories you may like: