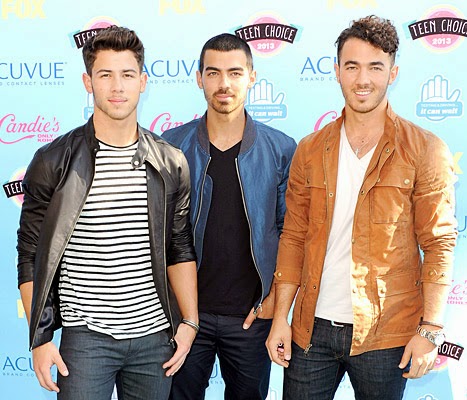 The JoBros are dunzo. Kevin, Joe and Nick Jonas — a.k.a the Jonas Brothers — have decided to break up. The band’s publicist, Jesse Derris, confirmed the news to Us Weekly on Tuesday, Oct. 29.
Earlier this month, the three brothers cancelled their 19-date tour just two days before the first show. “There is a deep rift within the band,” Derris told Us at the time. “There was a big a disagreement over their music direction.”
Two weeks later, the band broke their silence on Twitter to address their fans regarding the sudden cancellation. “Bear with us,” Nick, 21, tweeted Oct. 22. Joe, 24, added, “Please hold while we get our s–t together.” Oldest brother Kevin, 25, however, stayed silent on his personal Twitter page. The band’s official group Twitter page was shutdown earlier that month.
The New Jersey natives formed the Jonas Brothers band in 2005. They signed with Hollywood Records in 2007, and have released five studio albums to date. The band did, however, take a three-year break in 2009 before reuniting 2012 for their V album.
During an interview with radio station KDWB just one day before canceling their tour this month, the band explained why they went on hiatus. “We decided to take a break because, I think, in this crazy world that looks a lot of fun it’s also really kind of stressful and crazy at times,” Joe explained on behalf of his brothers. “For us, we were like, let’s not implode and let’s just take some time off and really kind of refocus on what we want to do.”
“We had so many individual ideas — whether it was personal or business wise — that we wanted to venture out in,” he continued. “Having that time to do it was really refreshing. We always have heart for the band, but it’s always important for us as well to take time when it’s needed.”
– US Weekly
Loading...
Full List of Ballon D’Or Shortlisted Players < Previous
Study Confirms That Men Love Looking at Women’s Boobs Next >
Recommended stories you may like: