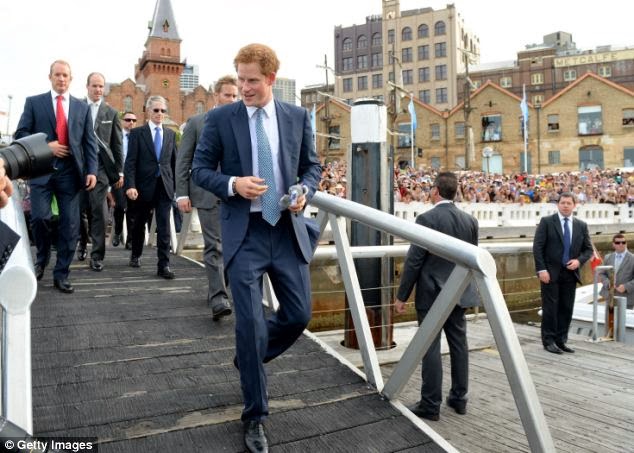 He is the Royal family’s greatest asset: a hugely likeable young man who charms his way around the world, winning hearts wherever he goes.
This weekend, Prince Harry was in Sydney, his first visit to Australia, where he received a rapturous reception with hordes of flag-waving, cheering people lining the city’s harbour, straining to catch a glimpse of the world’s most eligible bachelor.
It would seem that his charm has also borne fruit closer to home.
Cressida Bonas, his girlfriend, has finally overcome her fears about marrying into the Royal family and friends of the couple say that a wedding is very much on the cards.
“Cressie is going to marry Harry,” one of her friends told The Telegraph.
“Harry never stops talking about marriage and children, and she has now got used to the idea. The wedding is likely to take place next year.”
That the Prince, who turns 30 next year, wanted to settle down with Miss Bonas, 24, was no secret. Her free-spirited ways were said to have captured the heart of the man labelled “the party prince” and he was smitten as soon as he was introduced by his cousin, Princess Eugenie, in May 2012. But she felt too young to marry.
“Cressida has been in floods of tears,” one of her friends claimed. “Harry is coming on very strong, but she is all over the place. She thinks she is far too young to get married and is scared by all his talk of marriage and settling down.”
But the Prince persisted. When he was sent to serve in Afghanistan in November, the pair were in regular telephone contact throughout his four-month posting.
Upon his return, the romance blossomed, with nights at the cinema and time spent among friends. Last week they went to see a James Blunt concert; the following night it was the West End musical The Book of Mormon. The pair have the same sparkling sense of fun and relish a good party — Miss Bonas studied dance at Leeds University and graduated from the Trinity Laban Conservatoire earlier this year.
Her family, which has direct links to Edward VII, is bohemian and entertaining — something the Prince is said to like about them.
Her mother is Lady Mary-Gaye Curzon, 66, the Sixties “It girl” and daughter of the 6th Earl Howe. Her father is Lady Mary-Gaye’s third husband, the businessman Jeffrey Bonas.
One of her half-sisters, Pandora, is an accessories designer for Vivienne Westwood; her half-brother Jacobi Anstruther-Gough-Calthorpe is a polo-playing man about town. Her half-sister Isabella, to whom she is very close, recently married Sir Richard Branson’s son Sam. Before going to Leeds, Miss Bonas spent a gap year working in a bar and restaurant in Australia.
The Prince’s 24-hour stay in Australia allowed him no time to visit his girlfriend’s former haunt.
Tony Abbott, the British-born Australian prime minister and once head of Australia’s monarchist movement, welcomed the Prince.
“I regret to say that not every Australian is a monarchist,” he said. “But today everyone feels like a monarchist.”
A visit to Sydney harbour to inspect a warship parade caused a frenzy — with roars of applause wherever he was sighted. “Go, The Ranga,” cried some, using the slang term for redheads. Others shouted “We love you Harry” and “Harry, Harry, Harry!”
Georgia Marks, 11, was overwhelmed to have spoken to the Prince, bursting into joyful tears: “He’s so nice.”
Police were forced to remove one woman, Victoria McRae, 20, who ventured on to the harbour on a kayak with a flag that read “I heart U Harry”.
“He’s an eligible bachelor, I thought I was in with a chance,” she said.
Mr Abbott’s daughters Bridget, 20, and Frances, 22, were also keen to meet the Prince. Bridget smiled shyly as she stretched out her hand to the Prince. An excited Bridget then tweeted a photograph of her and her sister with the Prince, with the caption: “A once in a lifetime experience meeting Prince Harry.”
But while Australia was smitten with Harry, his heart was in England. From Sydney he travels to Perth, and then Dubai. But there is little doubt that he is counting the hours until he can be reunited with Miss Bonas.
– Telegraph

Loading...
Jose The Witnesser Punk’d By Shaffie Weru… Hilarious < Previous
These Were The First Tweets About Westgate… When We Thought It Was a Robbery Next >
Recommended stories you may like: