Real Madrid Confirms That Ronaldo is Still The Most Expensive Player, and Not Bale 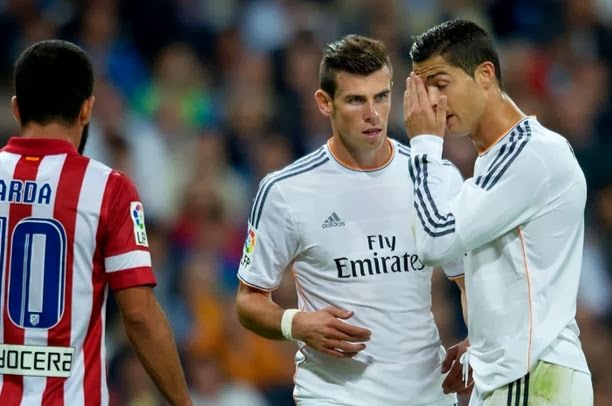 Real Madrid president Florentino Perez has claimed that Gareth Bale is NOT the world’s most expensive player, confirming that Cristiano Ronaldo’s transfer fee was higher than Gareth Bale’s.
According to Perez, Real Madrid signed Gareth Bale for £78 million (€91 million) from Tottenham, the revelations came to light after the Real Madrid president was asked about the value of Bale’s life insurance policy on Spanish television.
Speaking on Intereconomia television, Perez was asked by an interviewer if Gareth Bale had been insured for £78 million. He replied:
“Yes, sure. It’s a life insurance, against accidents. Bale is insured for the amount he cost.”
It means that Cristiano Ronaldo, who was sold to Real Madrid by Manchester United for £80 million, is still the most expensive player in the world.
Gareth Bale has been hampered by lack of match fitness since joining Real Madrid, but Perez was quick to deny that he had suffered a hernia.
“They said it was a hernia, but it isn’t. If he had one we would say so like usual.
“[Bale] hopes to be able to play on Saturday. His problem, as the whole world knows, is the lack of pre-season training, he suffered a thigh injury.
“But now he’s perfectly fine. I think he’s training normally, hoping to play Saturday.”

Loading...
Iran To Send Another Monkey To Space < Previous
Gor Mahia Phrase ‘Giniwasekao’ Goes International Next >
Recommended stories you may like: