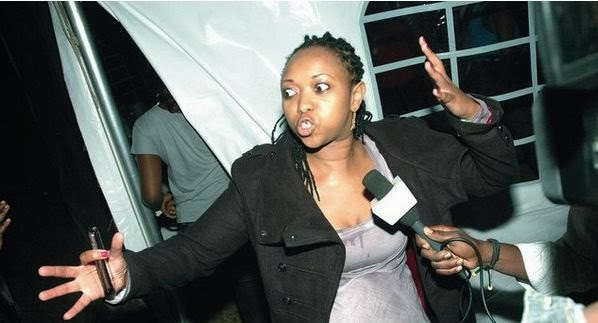 This is the year of Jubilee and it seems we’ll have 50 Shebesh and Sonko scandals to go with it.
First was the Kidero – Shebesh slap, then the Sonko meltdown on KISS 100, then Shebesh – Sonko physical fight that happened twice in less than one week.
Then this week, we’ve seen photos of Shebesh and Sonko in compromising positions.

In one of the photos that have been trending since Tuesday, the lady alleged to be Shebesh is seen performing some sexual action on a pot bellied man, alleged to be Sonko.
This is the particular photo that is believed to have led Ciku Muiruri to make an equally controversial post on Facebook.

In a well written indirect attack, the Classic 105 Busted presenter says that if she had a son, she would warn him that exposing his tiny weenie on the internet would earn him nothing but ridicule.

Nearly all men can stand adversity, but if you want to test a man’s character, give him power. If I had a son I would ask him to respect himself and others. I would ask him to never kiss and tell. And finally, I would warn him that exposing his tiny weenie on the Internet will earn him nothing but ridicule. Who do you think does more damage when scorned? A man or a woman?

It’s however important to note that confirmation on who leaked the photos has not been made.

Loading...
Who Leaked Shebesh’s NEKKID PHOTOS? < Previous
Wangari Maathai Listed Among The 10 People Who Should Not Have Won The Nobel Peace Prize Next >
Recommended stories you may like: