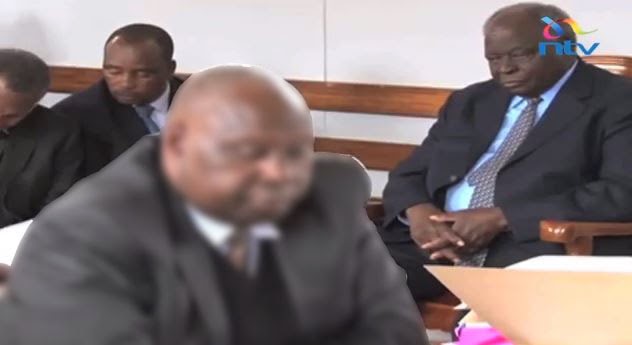 For the first time in so many years, retired president Mwai Kibaki stepped into a courtroom.
On Monday, Kibaki appeared in a Nyeri court to testify in a civil suit.
The case involves some property he co-owns with five other partners in Othaya. He is named as one of the defendants in the case.

Kibaki sought to testify in the court, but had his application dismissed by High Court judge Nelson Obwayo.

The former president patiently waited in court even after the court adjourned for one hour. He moved to the neighbouring Nyeri Golf Club before court resumed.
The court resumed session at around midday. The ruling delayed for over 30 minutes but Kibaki still waited.
Kamau asked the court to give his client priority in the testimony session.
He told judge Obwayo that though his client is a former Head of State he has some national duties therefore his presence should be taken as an urgent matter.
“Kibaki as a proprietor in the property, has credible evidence,” he said. The application was opposed by the plaintiffs’ lawyer, Lucy Mwai who told court that the application has no merit since Kibaki was enjoined in the suit recently.
She said she has not been served with some papers which will be used in the proceedings and therefore the matter should be adjourned.
Lucy further argued that though one of the defendeven though Kibaki is a former Head of State the civil matter procedures have to be followed.
The matter will proceed on October 4 and 22 and later kickoff again on October 5 and 8 for hearing.
Here’s a video.