By Ken   /   Monday, 30 Sep 2013 02:30AM   /   Leave a Comment
Kenyan banks have slowly been expanding across the East African region, with the Central Bank of Kenya confirming that ten of the country’s biggest banks have subsidiaries operating in East African Community partner states and South Sudan. Tom Jackson takes a look at ten of the richest and most prominent bankers making money from the expansion of the sector.
James Mwangi 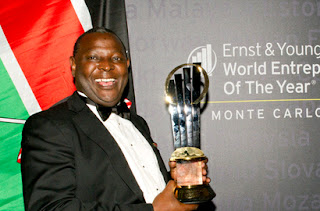 CEO and Managing Director of Equity Bank, Mwangi made $2 million dollars when he sold off some of his shares in the company in November last year. He has sold shares totaling $8 million in the last three years, and has an estimated wealth of $8 million. He retains a 4.65 percent in the bank, as the largest individual shareholder. Last month he was named Ernst & Young World Entrepreneur of the Year for 2012, as a result of his having turned around what was originally a moribund microfinance company and turning it into East Africa’s largest financial services provider, which now represents millions of customers in the region. The more than seven million Equity Bank accounts represent over half of all bank accounts in Kenya.
Gideon Muriuki
Co-operative Bank CEO Muriuki, through cash collected from the sale of shares and the value of shares he retains, is worth around $11.3 million. Muriuki has worked his way up the banking system, gaining 22 years experience between Barclays, Standard Chartered and Co-operative. A Graduate of Mathematics and a Fellow of the Kenya Institute of Bankers, he joined Co-operative in 1996 as Senior Corporate Manager, rising to Managing Director in 2001. He has restructured the operations of the bank, turning it around from facing closure in 2001 to becoming the fourth biggest in the country.
Jimnah Mbaru
With a wealth estimated at $5 million, Mbaru is the foremost investment banker in the East African region. He currently operates as the Chairman of Dyer and Blair Investment Bank and as director of the Nairobi Securities Exchange, having been chairman until 2001. He has led some of the greatest capital market deals such as the landmark $110 million KenGen IPO 2006, the $60 million Celtel 2005 corporate bond and the 1996 EADB Bond, the first ever corporate bond in the region.
Peter Munga
Munga founded Equity Building Society Ltd, the precursor of Equity Bank, and now serves as its chairman. He is listed amongst the richest men in Kenya. He is also the chairman of, amongst others, Pioneer International College, Kenya Genetic Resource Centre and Freshco International Ltd. He is also a Director of British American Investments Company (Kenya) Ltd. He is a retired civil servant, industrialist and educationist.
Titus Muya
Muya is the current non-Executive Chairman of Family Bank, having been founding Chairman and CEO for the first twenty-three years of Family Finance Building before it converted to a full commercial bank in 2007. His exact wealth is unknown but substantial, with his interests ranging from insurance, real estate and property development to commercial farming. Before entering the world of business, he worked as a senior government officer in the Ministry of Home Affairs and Tourism.
Sarit S. Raja Shah
The founder of I&M Bank, which has an estimated asset base in excess of $937 million and shareholder’s equity of approximately $169 million, Shah is well respected in the business community and earned $1.6 million in dividends in one year alone. In 2002 he was bestowed the honour of a Moran of the Order of the Burning Spear by the former President of Kenya, Daniel Arap Moi. He sits on the Board of several companies.
Martin Oduor-Otieno
CEO of KCB Bank, Oduor-Otieno holds a number of degrees and was appointed to the KCB board in 2005, becoming CEO in 2007. He is also chairman of the Kenya Bankers Association. KCB’s net profit rose 36.7 percent in the first quarter of this year, making it poised to become most profitable lender. Oduor-Otieno acquired shares to the value of Sh12 million ($150,000) last year.
Richard Etemesi
Etemesi is the CEO of Standard Chartered, as well as the current Chairman of the Kenya Bankers Association. Appointed to the board of Standard Chartered in 2004, becoming CEO in 2006, he has previously held senior management positions with the bank in Zambia and Uganda. The nation’s fourth biggest lender by market value, the bank is set to see profit growth accelerate this year as it adds more branches, faster than the 8.6 percent it recorded last year.
Dhanu Hansraj Chandaria
Chandaria is the principle founder of Fina Bank and an eminent entrepreneur with over 50 years experience in business. He also own Kenpoly, the leading households plastics company in East Africa, and serves as Fina Bank Chairman. Fina is a medium-sized financial services provider, offering loans to individuals and organizations. It also has arms in Uganda and Rwanda. The asset valuation of Fina Bank (Kenya) is estimated to be approximately $171 million.
Duncan Ndegwa
The first African governor of the Central Bank of Kenya (CBK), Ndegwa also served as the first Kenyan African Head of the Civil Service. His exact net worth is not known, but is sure to run into the millions of dollars. He recently published his memoirs.
Ventures Africa is a monthly Pan-African business magazine.
Loading...
Westgate’s #WeAreOne Campaign Raised Sh 90 Million in 4 Days… Bring Zack Back Home Sh 70 Million in 60 Days < Previous
Advertisers Paid Sh 35 Million For a 30 Second Ad During Breaking Bad Finale Yesterday Next >
Recommended stories you may like: