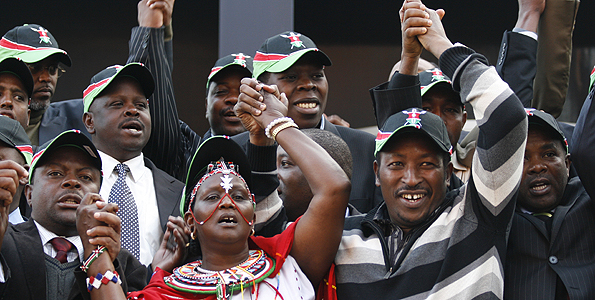 Kapseret MP Oscar Sudi, is one strange man. He was among the legislators who had accompanied Deputy President William Ruto to the Hague.
He even got a front row seat at the courtroom public gallery, but that did not stop him from dozing off, forcing security guards to occasionally tap him on the shoulders to wake him up.
The Star is reporting that he was seated next to Ruto’s wife Rachael Ruto, and Kenya’s ambassador to Netherlands Rose Makena.

The paper is further reporting that MPs had to be told to shut up, as they loudly chatted inside the gallery. The only reason they were not thrown out by the judges is the fact that there is a sound proof glass separating them from the courtroom.

The members of parliament yesterday called a press conference to complain about the prosecution for what they termed disorganization. They said that by postponing the proceedings till next week, Bensouda had inconvenienced them a great deal. They explained that they cannot return to Kenya right away, as there is no daily flight.

Loading...
PHOTO – How To Watch Friday NTV News… Poor Larry Madowo < Previous
Judge Ian Clears Hospital Bill For Sick Woman And Pays School Fees For Her Daughter Next >
Recommended stories you may like: