For the past two days, NTV has been airing this story about Dr. Prophet Victor Kanyari of Salvation Healing Ministry Church.
On Sunday, Enock Sikolia exposed the rogue prophet as a fraudster. In a recorded phone conversation, Pastor Kanyari refused to pray for the NTV journalist after it emerged he could not afford the Sh777 demanded.
In another call, Pastor Kanyari demanded Sh7,777 so that a container detained at the port would be released. According to him, God had showed him it would be released in 7 days… never mind it was a false story by the journalist. 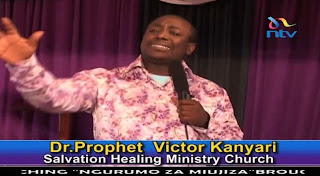 Last night, the same station revealed that Prophet Kanyari is the son of another fake prophet, Lucy Nduta, who was arrested and prosecuted in 2006 for swindling Christians. She demanded at least Sh200,000 for a miraculous Aids cure, something she did not deliver.

Now, it is emerging that Pastor Kanyari is the husband to gospel singer Betty Bayo, famous for her hit singles Siyabonga and 11th Hour.
Since the airing of the story, rumours have been spreading on social media that the two are a couple and we’ve been seeking confirmation since.

The two got married last year in a private ceremony. She refused to reveal her husband’s name to the Star newspaper, describing him as “a good man with a good heart.”
Asked about who was in attendance, Betty said, “Everyone that matters in her family was at the secret wedding and knew about it.”

Why did Betty refer to it as a secret wedding? Why did she refuse to reveal the identity of her husband?
Did she know her husband was a rogue prophet?
If she didn’t then, did she ever find out within the course of their marriage?
Being a gospel singer, what did she do after finding out?

Pastor Victor Kanyari also doubles as a gospel singer. Here’s one of his song.

Loading...
Kenya Has 8,400 Dollar Millionaires… Fourth in Africa < Previous
Kenyans Reactions To That Rude Tujuane Chic Last Night… Eda Atieno Next >
Recommended stories you may like: