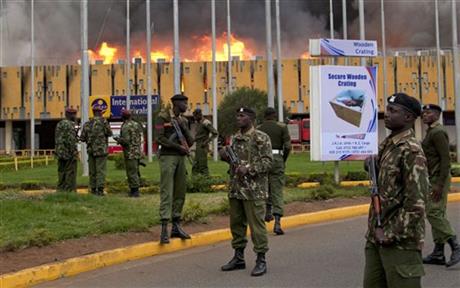 NAIROBI, Kenya (AP) — Officials in Kenya investigating the massive airport fire that gutted the arrival hall at Nairobi’s main airport said Thursday that first responders looted electronics, a bank and an ATM during and after the blaze.
The officials said first responders stole electronics and money from an ATM. Another official said that police guarding the site overnight attempted to a take a safe from a bank in the burned-out arrivals hall, which also houses several foreign currency exchange shops.

All four officials who described the alleged looting are close to the investigation. They insisted on anonymity because they weren’t authorized to share the information before the investigation is complete.
The fire-fighting response to Wednesday’s inferno was criticized as slow and inadequate, but the officials could not definitely say the looting was carried out by firefighters. One official said there was now behind-the-scenes finger pointing taking place between the police, fire department and army. Another official said specialized police units had attempted to steal the safe overnight.
The criminal investigations policeman for the airport, Joseph Ngisa, said he hasn’t received formal complaints of theft and that police are waiting for affected institutions to report what they lost in the fire.

All public servants in Kenya, including police, firefighters and soldiers, are poorly paid and frequently accused of corruption. Police officers who guard the entrance to Jomo Kenyatta International Airport are well known in Nairobi for demanding bribes from taxi drivers and other vehicles with Kenyan drivers.
International flights, meanwhile, resumed Thursday as officials improvised immigration and luggage routines.

Kenyan officials, assisted by members of the FBI, investigated the cause of the fire. One of the security officials who spoke to AP said the investigation had ruled out terrorism and was now trying to determine if the fire was intentional or accidental.

Michael Kamau, the cabinet secretary for transport and infrastructure, said Kenyan officials were receiving assistance from international agencies “because we intend to carry out a full investigation on what happened yesterday.” One of the officials who spoke to AP confirmed that members of the FBI were assisting.
Kamau said the design of the airport — constructed in the mid-1970s — made it challenging for firefighters to access certain areas with water hoses. Kamau said he was “satisfied” by the response of firefighters from private companies but did not mention the airport firefighters, who responded slowly and whose equipment wasn’t fully functioning.

Jomo Kenyatta International Airport is East Africa’s largest aviation hub, and the fire disrupted air travel across the continent as the airport canceled all international flights Wednesday. Many inbound flights were diverted to Tanzania and the Kenyan coastal city of Mombasa. Domestic flights were being operated from the airport’s cargo terminal.
Firefighters were desperately short of equipment Wednesday. The airport has fire trucks but some were not filled with water and personnel couldn’t be found to drive others. At one point while battling the blaze men in government uniforms lined up to pass buckets of water to fight the fire.
No serious injuries were reported.

President Barack Obama called Kenyan President Uhuru Kenyatta to offer U.S. support. The fire broke out on the 15th anniversary of U.S. Embassy bombings in Kenya and Tanzania that killed 224 people in total, mostly Kenyans, but also a dozen Americans.
Nairobi is the capital of East Africa’s largest economy, but public-sector services such as police and fire departments are hobbled by small budgets, corrupt money managers and outdated equipment or an absence of equipment.

Loading...
Plane Collides With Cow on Indonesian Runway < Previous
Kenyan Pigs, Cats and Dogs… Plans For The Weekend? Next >
Recommended stories you may like: