Photographer Captures Usain Bolt and Lightning on The Same Photo 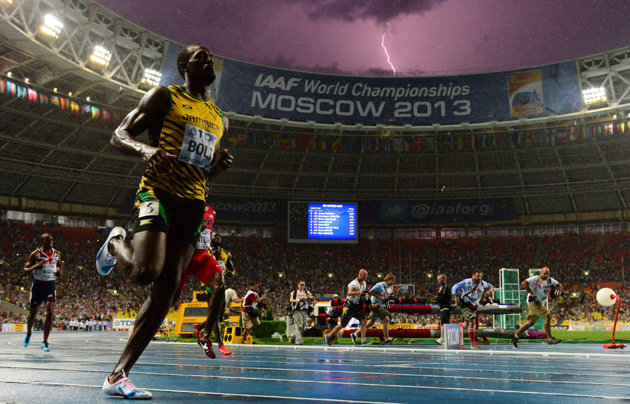 Usain Bolt has been almost as famous for his posturing in front of the camera as he has been for his incredible sprinting.
Yet for all those thousands of poses, the photograph that defines his career has now been taken in the most unguarded of moments by sheer chance.
French photographer Olivier Morin was covering the 100m final in Moscow for AFP, and captured a magnificent picture of Bolt as his momentum saw him drift round the track following his win on Sunday night.

Morin snapped a shot that would have been a beautiful photograph on a dark and stormy night no matter what the circumstances.
But the photography gods saw to it that a bolt of lightning crackled down behind the stadium at the exact moment the picture was taken.

The incredible resulting image says it all: Bolt, standing tall, an incredible physical specimen, with his rivals trailing in the background, as much an unrepeatable natural phenomenon as the millions of volts of electricity cutting through the Russian night sky.
When Bolt has hung up his spikes, this will surely be the picture that we all turn to when it’s time to remember his greatness.
The picture has instantly become one of the great iconic sports images.