Mugabe: I Am The Greatest African Leader EVER… Mandela is an Idiot and a Coward 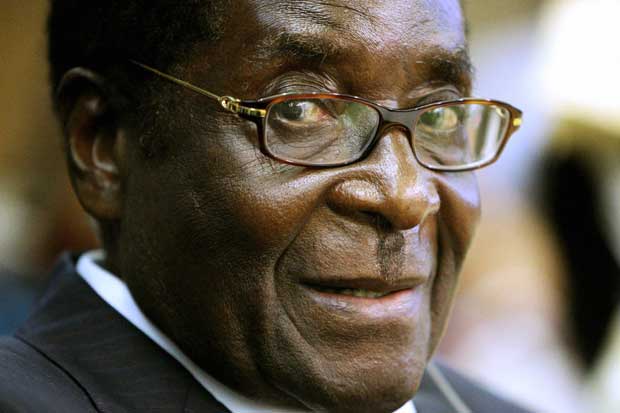 Newly re-elected Zimbabwean leader Robert Mugabe has called Nelson Mandela, the former leader of South Africa, an “idiot and a coward. Mugabe voiced his opinion during a rally he held to celebrate his seventh election victory.
Mugabe believes that in “winning” this latest election he has proved himself the greatest African leader, ever. UKZambians reports Mugabe told the rally:
“My huge victory in these elections proves I am the greatest leader in the history of Africa.“

He went to say that the world should love him more “than the idiot Mandela.” He followed by saying “[Expletive] Nelson Mandela” and claimed that he worked hard to fight colonialism while Mandela “sat on his (butt) in prison for 27 years.” According to Mugabe this makes Mandela a coward.
Days ago Mugabe was declared the winner of a very suspect election, allowing the aging world leader to maintain his grip on power. For more than 30 years Mugabe has ruled Zimbabwe but many believe that his election successes involve foul play and corruption.

The US and UK have already expressed concerns over Mugabe’s recent win and the Zimbabwean opposition were quick to call the election “compromised.”
The 89-year-old Mugabe is well-known for delivering fiery speeches but blasting Nelson Mandela, who remains in hospital fighting for his life, is a low blow, even for Mugabe.

He has led Zimbabwe, formerly Rhodesia, since 1980 but little has changed to improve the lot of ordinary citizens in that country. Poverty is still all too prevalent in the urban areas with citizens observed cooking on the streets and living in poverty.
The African state of Rhodesia was a thorn in the side of the UK for many years. It had a terrible track record as far as the rights of its black people. When independence was finally gained the world and the people of Zimbabwe were hopeful.

Like all new countries it was not smooth sailing and of course some in the west with a vested interest simply wanted the new system to fail. Those in South Africa who had previously gained at the expense of the blacks were one group that did not smile at the prospect of change. To include all of these people in the same generalization though is wrong.

However, many including the old colonialists in the UK, preferred white supremacy in Africa. Yes, we all have terrible track records on human rights when we look back into history, don’t we?
In this election Mugabe allegedly received the majority vote. There are reports, however, that up to a million people were restricted from voting. Seven thousand observers monitored voting for Prime Minister Morgan Tsvangirai and they reported that in many urban areas supporting Tsvangirai voters were turned away by the droves. In mainly rural areas, widely known to support Mugabe, this did not happen.