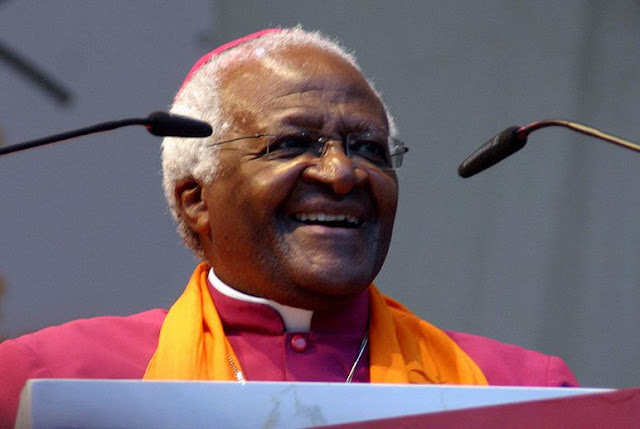 He has a hotline to God but finds it somewhat harder to tweet. Retired South African archbishop Desmond Tutu launched a Twitter account on Thursday only to find it suspended hours later.
The 81-year-old’s @TutuLegacy feed picked up hundreds of followers soon after going live but was then blocked, much to the dismay of his foundation, which runs the account.
The suspension was only temporary, however, and on Thursday afternoon the foundation said it had received an apology. “Twitter says it’s ‘sorry for the inconvenience’ over our suspension,” it tweeted. “We got caught up in a spam cleanup. Glad it wasn’t something we said.”

Earlier, Tutu, who officially retired from public life in 2010, had been widely welcomed to Twitter. His first tweet read: “In an ode to the words spoken by Mandela when he retired from public life: ‘I am elderly and decrepit. Don’t tweet me; I’ll tweet you!’ DT.” Another read: “Some have described Twitter as a blessing in the hands of retired members of the clergy. There is no space to ramble. DT.” But then came the sudden blockage, prompting the foundation to express dismay at heavy-handed action by the Silicon Valley giant. It said: “Twitter has not explained how following 30 people could be construed as ‘aggressive following’ or whether the number of people who followed @TutuLegacy in a short space of time was to blame.”

Tutu’s daughter Mpho, who heads the foundation, added: “I hope the powers that be at Twitter find it in their hearts to fix the problem and let us communicate again. We need to reassure all those people who started following us today that this is the real deal!”
Tutu himself said: “The @TutuLegacy is the only real Twitter account that speaks for the Desmond and Leah Tutu Legacy Foundation, through the voices of Desmond Tutu and the reverend Mpho Tutu, who runs the foundation.”

The brief snub to Tutu came just days after his fellow Nobel peace laureate Nelson Mandela received a written warning that his electricity and water might be cut off over an unpaid council bill. It transpired that the notice had been sent to the wrong address.
Meanwhile Tutu’s home in Cape Town was burgled early on Wednesday morning while he and his wife were asleep. The couple were not harmed.
Tutu’s spokesman, Roger Friedman, said a remote control device for the house gate was stolen in the incident. Tutu got up to check after the house alarm went off, noticed nothing unusual and went back to bed. Later he realised there had been a burglary.
Police say they are investigating a home burglary in Cape Town’s Milnerton suburb in which small household items were stolen. No arrests have been made.

Loading...
‘That’s So Raven’s’ Raven Symone Comes Out of The Closet… She’s Lesbian < Previous
Emmy Kosgei To Wed Millionaire Nigerian Pastor Next >
Recommended stories you may like: