This Rhino at Ol Pejeta Has Armed ‘Bodyguards’ 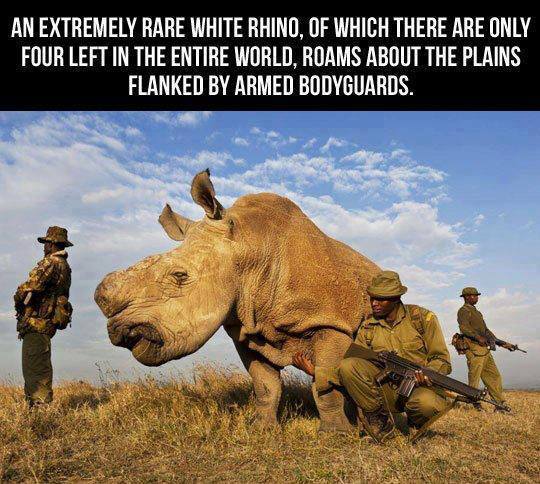 A four man anti-poaching team permanently guards a Northern White Rhino on Ol Pejeta Conservancy in Kenya, 13 July 2012. The Ol Pejeta Conservancy is an important “not-for-profit” wildlife conservancy in the Laikipia District of Kenya and the largest sanctuary for black rhinos in East Africa. It is also the home of 4 of the world’s remaining 8 Northern White Rhino, the worlds most endangered animal. There has been an increase in poaching incidents on Ol Pejeta recently, in line with a massive worldwide increase in rhino poaching linked to the rise in the Asian middle class.

Anti-poaching teams provide close protection to the rhino, with 24 hour observation over all rhino on Ol Pejeta and 24 hour armed guard protection over the 4 Northern White Rhino who are kept in their own Boma area. The team have developed extraordinary relationships with these Rhino, leaning on them, scratching them and displaying tremendous affection towards these most endangered of animals. Each of the men in these teams feels a genuine vocation towards the protection of these animals, something the rhino seem to sense, and this emerges on a daily basis as the men walk with the rhino through their day.

Loading...
Eric Omondi To Host New Reality Show Dubbed ‘OLX SELL IT’ < Previous
16 Tips To Avoid Being Drugged in a Night Club Next >
Recommended stories you may like: