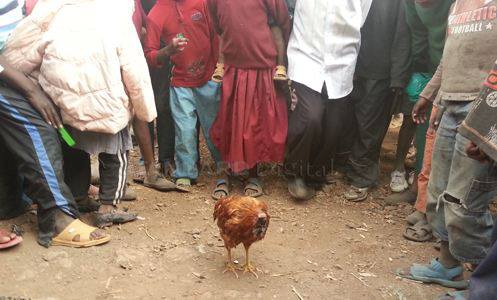 Residents of Kware area in Ongata Rongai are still in shock after stumbling upon a headless cock. It is suspected that it was used in witchcraft.

One of her neighbours later inspected the paper and informed her that it contained a breathing creature. “At first we were afraid to check but we opted to do so when another neighbour dared to open and find out what it was,” she said.
Frightened residents ran for dear life when a cock without a head emerged from the polythene paper and walked freely along the road as another dead and rotten cock which was black in colour was left in the polythene paper.

One resident alleged that the cock was probably used for witchcraft purposes, saying that the area is well identified with the practice.

Loading...
20 Things 20-Year-Olds Don’t Get < Previous
Raila Has Refused To Surrender 6 Government Vehicles and Installed Illegal Sirens – Muthui Kariuki Next >
Recommended stories you may like: