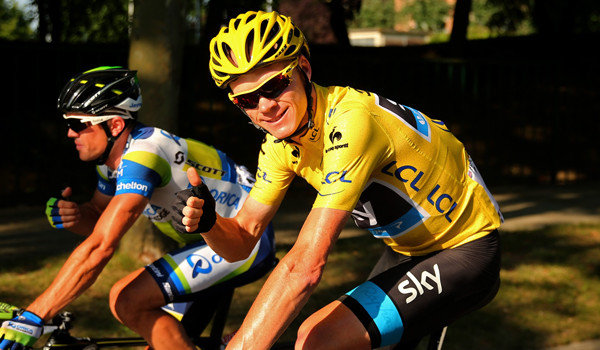 Froome won the 100th Tour de France title, finishing more than four minutes ahead of his closest rival in the overall standings.
The 28-year-old, who learned to ride on dirt tracks in Kenya, crossed the finish line in Paris arm-in-arm with his Team Sky colleagues to become the second Briton to win the title in consecutive years.

Sir Chris said: “It is a huge achievement and I almost feel sorry for Chris because people are almost getting blase about it.
“People think it is another British winner, so that is what we should expect – but if you take a step back and get some perspective, you can see what a monumental achievement it is for him to have done this.”
Froome set off for the French capital in the leader’s yellow jersey for the final stage of the Tour after more than 80 hours and 2,000 miles in the saddle.

He had to wait until he reached the Champs-Elysees to be crowned champion, but tradition dictates the leader is not threatened on the final day of Le Tour.
After winning the title, Froome thanked his family, friends and teammates.
He said: “I’d like to dedicate this win to my late mother. Without her encouragement to follow my dreams I would probably be watching this at home on TV.
“This is a beautiful country, with the finest annual sporting event in the world … and this is one yellow jersey that will stand the test of time.”
Speaking after the finishing line, he said: “It brought tears to my eyes just coming over the line with the guys like that.
“This really was an amazing way to finish off a fitting 100th edition of the Tour de France.”
Froome’s father, Clive, told Sky News the family was “thrilled to bits” about the win.

He added: “I think rather like Chris it was huge relief. We followed every single kilometre of the very lengthy three weeks and (it’s) just huge relief he’s there safe and sound, and delivered the goods.”
Britain’s Mark Cavendish failed to make it five in a row on the Champs-Elysees after finishing in third place in a sprint finish.
Marcel Kittel won the stage, with Andre Greipel in second.
Prime Minister David Cameron led the tributes to the cyclist. He tweeted: “A brilliant win by @chrisfroome.
“After two British winners it’s only right the Tour de France comes to Yorkshire next year.”
Welsh hurdler Dai Greene tweeted his congratulations to Froome, saying: “Team Sky did amazing. Massive congratulations to @chrisfroome , what a worthy winner.”
Broadcaster Gary Lineker also took to the social networking site to voice his delight, tweeting: “Congratulations to @chrisfroome on a stunning #TourDeFrance victory. A monumental effort.”
Retired cricketer Andrew Flintoff said: “Just seen the news , amazing effort from @chrisfroome , well done! #teamplayer”
Reflecting on his month-long ride across France, Froome added before the final stage: “It’s difficult for me to put it into words. It’s been an amazing journey for me.

“The race has been a fight every single day.”
Team Sky manager Dave Brailsford set about grooming Froome into a winning rider the moment he joined the squad in 2010.
His protege finished second in the 2011 Vuelta a Espana and helped Sir Bradley Wiggins to success on the Tour de France a year later.
“I’d like to come back and keep contending for the Tour for as long as I can and as long as I have the motivation,” he said.
Froome claimed the yellow jersey on stage eight – the first of his three stage wins en route to Paris.
Colombia’s Nairo Quintana finished second overall, four minutes and 20 seconds behind Froome, with Spain’s Joaquim Rodriguez third, a further 44 seconds back.

Loading...
Forbes List of Highest Paid Actors 2013 < Previous
Video – Secret Recording of KNUT and Government Negotiations… Officials Pleaded For Their Safety Next >
Recommended stories you may like: