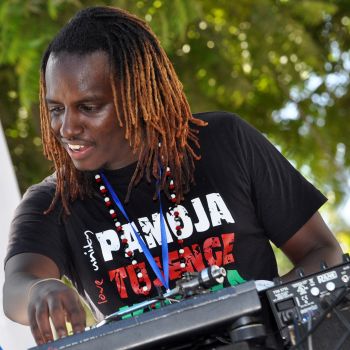 DJ Kaytrixx has been unveiled as Safaricom’s official DJ for their sponsored rugby events’ after parties.
This was announced yesterday during the launch of Safaricom 7s at Kasarani. The tournament will take place between 20th and 22nd September.
This was the press release announcing DJ Kaytrixx’s new role.

Safaricom and the Kenya Rugby Union have announced an extension of their partnership by signing of a new 3 year deal that includes sponsorship of the local Sevens circuit under the newly launched Safaricom Sevens Series. This means that the Dala Sevens, Christie Sevens, Kabeberi, Driftwood and the Prinsloo Sevens will fall under this banner. Safaricom’s sponsorship of the circuit will reward 14 fans with a fully paid trip to any of the IRB circuit games and also includes after-parties to be headlined by DJ Kaytrixx.

DJ Kaytrixx was also recently named as one of the entertainers for the ‘Niko na Safaricom Live Tours’.