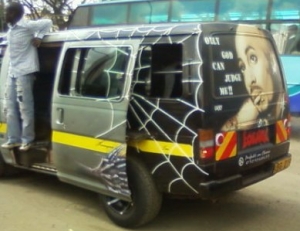 By ERIC LUNGAI
A matatu driver and his conductor incurred a huge loss when all the passengers they were ferrying alighted before paying when their pleas to switch off loud music fell on deaf ears.

The irked passengers walked out of the matatu in protest when the driver refused to lower the volume of the loud music. “If only Kenyans would pull such stunts, we would inject some sanity to this sector,” a female passenger said.

The matatu’s proverbial 40th day had come. Elated commuters who had been forced to put up with its annoying music said its driver and conductor are also known for verbal tirades they fire at anyone who dares to challenge them.

A passenger who has had an ugly experience with the matatu cites a recent incident where an elderly woman almost fell off the car as passengers aren’t given ample time to alight.

This particular evening, the matatu was heading to town from Rongai. Since it was peak hour, passengers fought to hard rock, passengers were unable to stay sane.

With every corner patched with a speaker that blew with cracking brash music, some passengers picked migraines while others became nauseated. Do you know the kind of music that makes you high on tea? That.

The first salvo to the conductor came from the back seat where the crank was really cranking. The angered passengers asked him to tell the driver to lower the volume but he ignored.

Hell broke loose when the conductor swang a ‘style up’ line to the passengers. One of the male passengers did what a man has to do to prove his title. He warned the driver of dire consequences if the now incomprehensible tunes continued annoying them. Like his conductor, the arrogant driver told the passengers to keep off their business.

“If the music is loud, why did you board this matatu?” he asked the incensed passengers.

The agitated passengers unanimously threatened to walk out of the vehicle if their prayer wasn’t heard.

The matatu had to stop a few metres away to Lang’ata for one of the passengers to alight. And this was the grand moment when all the other passengers followed out one by one. The small operation took two to three minutes. All the passengers filtered out leaving the two with an empty matatu, no money but their crank and rock kept the empty seats alive.

The two blamed each other, but it was the passengers’ turn to ignore their pleas. The conductor’s plea to have them back in the matatu also fell on deaf ears. Not even switching off the music lured the passengers back to the car.

The two were left licking their wounds as another ‘friendly’ matatu came to the passengers’ rescue.