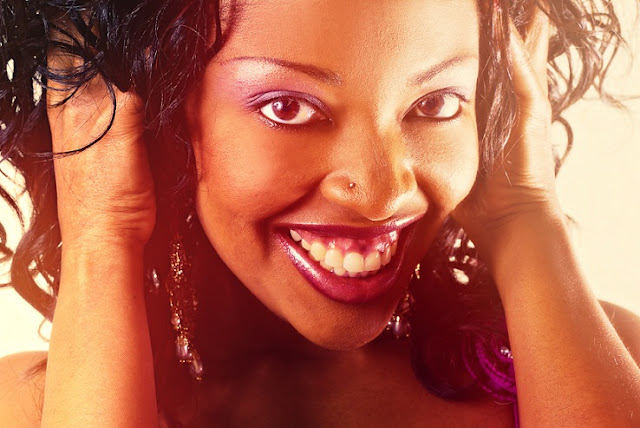 A few years ago, gospel artiste and TV presenter Kambua opened up about her life, to True Love magazine. This is how it went.

When did she start singing?
Singing is clearly in my blood. She was very young when she started singing in her local church and in school. Whenever there was something she could get involved in, like music and drama festivals or Christmas plays, I was always there.

How did she grow up?
She grew up in Nairobi with her two brothers, Babu and Ndzomo . Having grown up with boys, she was very much a tomboy in her earlier years. She did not like girly things and chose to climb trees with my brothers instead, much to my mum’s frustration. She still has scars on my knees to show for it.

What kind of music does she sing?
She writes and sings her own material – a mellow mix of R&B, kwaito and pop she calls Afro-fusion – and Kenyans love it.

What was her darkest time?
In high school, her dad began to get sick, and was unable to work. Because he was unable to pay for my school fees, she was in and out of school. Thankfully, her headmistress at Lukenya was very gracious and allowed me to finish school with the understanding that my dad would settle the bill when he got back on his feet.”

That was a tough period of her life as all of her friends were leaving the country to pursue higher education overseas, and there she was with all these dreams and no way of realising them. The family’s financial challenges were so strenuous that she was unable to attend even a local college.

How did she cope with her challenges to make ends meet?
A friend encouraged her to audition for a theatre role with Heartstrings Ensemble and although she had never thought of acting, she went out and auditioned. She got the role and was able to do a few shows (Family Business and Something’s Burning).

In addition to theater, Kambua kept herself busy singing in church and getting involved in the youth ministry at her local church, Parklands Baptist Church. She also ventured into the gospel music industry by recording background vocals for various artists, including Mbuvi, Bahati and Kavutha (4 Winds).

How did her breakthrough come?
About two years after completing high school, the dark cloud that was hovering over her family lifted. Her father got well. This enabled Kambua to pursue her dream of embarking on a university degree overseas, and when an opportunity presented itself, she opted to study music.

In 2005, Kambua applied to several universities, and was accepted by Ambrose University College, a Christian university in Calgary in Canada.

How did she start recording her own albums?
Before leaving for Canada, Kambua had recorded an album, ‘Nishikilie’ took it around to radio stations, but when she moved, she never quite followed up on it. When she got back in 2008, she discovered that the title track of her album had been getting lots of airplay. People knew the song, but had no clue as to who was behind it.

Kambua then decided she needed to launch the song properly, do a few live performances for her growing fan base, get her name out.

How was the response from her fans?
I received such a fantastic response to my first album that I figured there was something for me here, so I decided to pursue it and have some fun in the process.

What was her most challenging thing in music?
Getting a foot in the industry was the hardest part. She would take my music to stations and they wouldn’t play it because they had no clue who she was.She also did many press interviews that were never published, and would get allotted last in concerts just when people were walking out. It was very frustrating, but my parents kept affirming me that things would work out in God’s perfect time.”

What is her advice to aspiring musicians?
Music doesn’t pay off immediately. She has definitely had her broke days, but persistence and hard work do pay off.

What is your fashion?
She loves to wear dresses and that is what I wear most. Fashion design is one of the “to do’s” on her bucket list. She catches criticism from my viewers whenever she deviate from dresses to trousers.

Having ventured into television, what does she feel about it?
Kambua presents Citizen TV’s Sunday morning show, Rauka.  She love her role in the show as she is able to share both her passion for Christ and for music with our viewers.

How does she handle her fame?
Being a popular face on TV isn’t always easy. She is open to criticism both negative and positive. By nature she likes to be on the right side of the road, so she has had to develop some tough skin for the negative feedback.

How does she balance her work and personal life?
She purposefully plan for and always take some ‘me time’ which she spends alone at home. She is also again very thankful for my family who are at the core of my support system.

What charity work is she involved in?
She has been involved in a lot of charity work through various church youth ministries, such as Passports Incorporated, a US-based Christian organisation where she volunteered with youth for four years. She also does mission work locally with K-Crew, the outfit behind the Rauka show.

What word does she live by?
There are no limits to what you can do when you are set free. Many times we are held back not by our limitations, but mostly for fear of daring to be the best that we can. Marianne Williamson best said it, that ‘our deepest fear is not that we are inadequate, our deepest fear is that we are powerful beyond measure’. I’ve learned to not limit myself because I serve a God who knows no bounds.”
© nairobiwire.com
Follow @nairobiwire

Loading...
11 Obvious Reasons Women Will Reject You On The First Date < Previous
Horror As Robbers Attempt To Break Into To Mutula Kilonzo’s Grave To Steal His 0.5 Million Casket Next >
Recommended stories you may like: